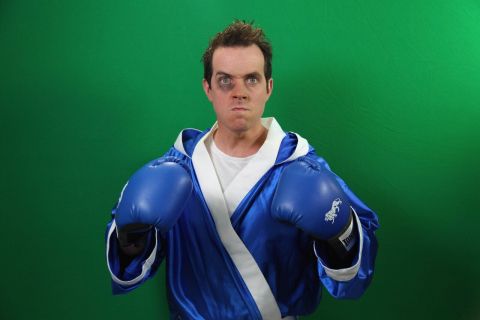 I must confess I’d seen very little of Dick and Dom, the television duo famed for their bogie jokes, before this. Judging by the enthusiastic welcome they received I was in a minority. After a 20-year partnership, Richard McCourt and Dominic Wood clearly have legions of fans of all ages, who filled much of the temporary raked seating auditorium of the McEwan Hall, many bringing along their own kids.

After the warm-up video on a big screen, complete with Rocky soundtrack, the audience is divided into teams - the Dicks and the Doms - and battle commences.

Starting with a competition to see who can sign best to a song about bogies, the two halves of the audience try to out-do and out-shout each other. Various members of the audience are happily humiliated on stage, while egged on by their noisy team. An umpire chooses the winner at the end of each round.

The Fringe programme recommends 5 year-olds and older. But much of the humour - from the opening video to a “legal swear word” karaoke - relies on a higher level of maturity and literacy than younger kids possess. If your child doesn’t get why “futtocks” and 3-fingered salutes are ways you can do “legal” swears then this might not be for them.

While younger kids may be lost at times by the innuendo and some of the more grown-up humour, the show moves onwards at a fast pace and there’s plenty of audience participation and visual jokes (involving spraying the audience with water and cream pies in faces) to reel them back in.

Classic gags like when Dom goes off-stage to the toilet and forgets to turn off his mic are carried off well. A highlight for my two kids (5 and 6 years old) was when a tough-looking dad wearing an ape mask is mimicked by Dick using a high pitched monkey voice, before leading the audience in a rendition of YMCA. Very funny.

Dick and Dom’s brand of orchestrated chaos manages to pack in something for the spectrum of ages, but it’s older kids and grown-up fans that will get the most out of it.