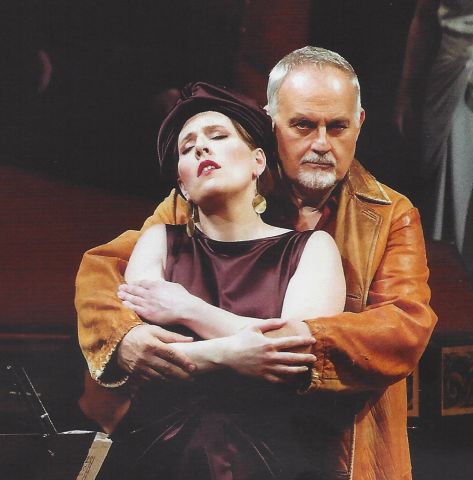 This is the 450th anniversary of the birth in Italy of Monteverdi. The world of opera was at its beginning. That's every good reason to stage all three operas he wrote whilst in his early 70s in one week at the Usher Hall. The second of the three, Il ritorno d’Ulisse in patria, is described as Dramma per music in a prologue and three acts by Claudio Monteverdi to a libretto by Giacomo Badoaro after Homer's Odyssey.

Immediately we saw Ulisse saying farewell to Penelope. We were then taken on a twenty year journey whilst he is away fighting and she is sorely tempted by suitors. Eventually Penelope finds her son Telemaco but simply won't believe that the rough outcast could be her Ulisse. Heavenly bodies had ensured his shipwreck on his way home when he found himself alone on a beach.

John Eliot Gardiner was perched on a high stool in front of his orchestra whilst the action came and went through the two doors on either side of the stage. The heavenly bodies were singing high up alongside the organ console. It was gripping all along, and sometimes modestly sensual. The humour was Iro's played by Robert Burt, who was momentarily interfering with the harp to the consternation of its player before he was stroking the conductor - who gave him no heed.

Eventually forced to choose a suitor, one candidate after another failed to string Ulisse's imagined bow until Ulisse himself showed how it was done. But it still took further rather private evidence for Penelope to believe she had her Ulisse back.

It was a totally confident production with a team of great voices with the master of Monteverdi, John Eliot Gardiner, at its centre and concentrating on producing music which complemented and never overwhelmed. Disconcerting though, and I can't believe intended, was the knitting of the recorder players.