What Lies Beneath, Zoo Pleasance, Review 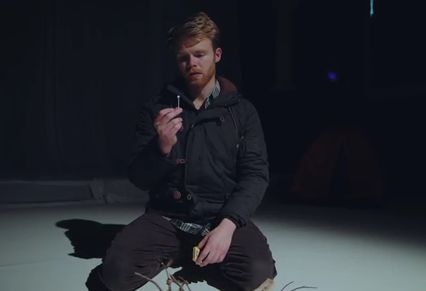 From a small tent a back-lit figure emerges into the cold.

He seems to be on an almost shamanistic retreat into the still whiteness, trying to convince himself that he is going to figure out what to do; but certainties are elusive. There are bigger problems than starting a fire on an icy mountain.

The silence is broken by the arrival of his brother, incongruously dressed as if straight from the office. He has one quick question – why is his sibling being such a dick? He accuses him of being melodramatic, sulking and having all the gear but no idea.

Banter about family holidays conjures their father from the tent, even more inappropriately planning a barbeque. They are joined by a childhood friend and it’s clear that they all want him to turn around, pick himself up, perhaps get back in the saddle. Stop doing this to himself.

These memories are distractions from the real issue – the fact that he lost a love and that he has not moved on but keeps replaying the same scenes, skirting around the subject. Even the repeated scene sees him and the girl skate around, making small talk even though he wants to know everything about her.

The heart does strange things when it gets cold. As hypothermia sets in he becomes increasing delirious. Why is he replaying this and is he completely out on a ledge?

This devised, physical piece looks at the struggle to deal with loss and male grief, where strength can be a weakness. It juxtaposes realism with surrealism, comedy and tragedy. The sung Scandinavian folk music lends an ethereal quality and it’s visually pleasing. It feels a little choppy though, with the rough and tumble first half and movement driven latter, in which the dance like sequences don’t quite pay off.

The show is well performed and has a lingering icy charm even if, like his campfire, it doesn’t get fully alight.