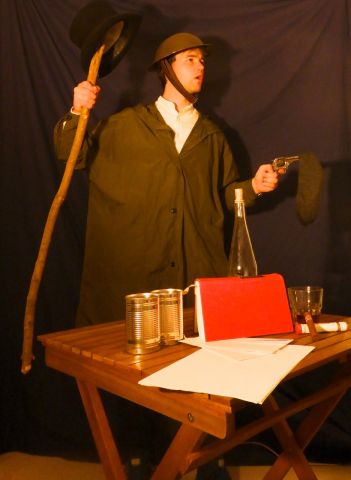 One lonely building in the heart of Scotland’s wilderness. Four lost souls with a shared history. Only one actor in a hugely ambitious project.

The story begins as a monologue from Sir Bertrand Baringburg, an English upper class gentleman who stumbles upon this bothy requiring shelter. It is the 1920s; the Great War is over, business has returned to normal and Sir Bertrand has a clichéd English hatred for all things Scottish. His internal monologue is soon interrupted by the arrival of middle-class Benjamin Bassett, a climber by hobby. Next to join them is Billy Boyd, a Glaswegian lapsed Catholic; finally, Irish Catholic priest Brendan O’Brien arrives to make up the four. Bolstered by a history of being in the army and a clash of religious beliefs, the four men realise their connections with tragic consequences.

This should not be a one man show. A story of this nature should have an actor per character, and as much as he tries Liam Kelleher is but one. Apart from some questionable accent changes, none of the characters are significantly distinguished, often making it hard to tell who is speaking, or indeed why. Each character is depressingly stereotyped and shallow, which occasionally strays towards offensive. A small amount of projection from Kelleher would invalidate the microphone he seems dependent on, which is completely out of place in a studio. For a script that may be forgiven its clunky-ness were its characters believable, the lack of presence or depth makes this somewhat two-dimensional.

Micro drama is difficult to do well, and solo performances are a skilled art. Unfortunately, tackling both was leading lambs to the slaughter.