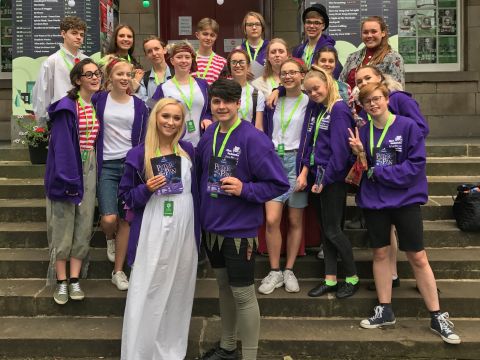 No flies on this Peter Pan, but plenty else to admire.

A very talented young cast and creative director tell the classic Peter Pan story with the bonus of music. Despite no dog as Nana and the feet staying firmly on the ground, there was sufficient to inspire the imagination through some excellent choreography and the general movement of the cast, in limited stage surroundings, was impressive.

The actor playing the title role handled the static Tinkerbell very adroitly and in such a tale added credibility to the existence of a fairy. He also conveyed the arrogance of Peter with some of the classic posturing added to a fine singing voice.

Wendy was so assured in everything she did that the girl who played her must have a good future if she follows theatre as a career. Mr Darling/Captain Hook also impressed with sufficient menace to be credible without scaring the children. The ‘lost boys’ were all girls, but a good ensemble as were the pirates who were also girls with one token lad.

Occasionally, the excellent band were in danger of slightly drowning the non-amplified singers and masking the lyrics that carried the plot. Unless you were with a child that did not know the story, it is hard to know if all the nuances of this production came over entirely without the usual stage tricks, but the company certainly pull out all the acting tricks to compensate.

Despite having small parts, the lads that played John and Michael came over well as did the girl who played Tiger Lily and I think doubled as Lisa the maid.

What came over was that the young cast had not only been well taught but were putting what they had learned into practice.