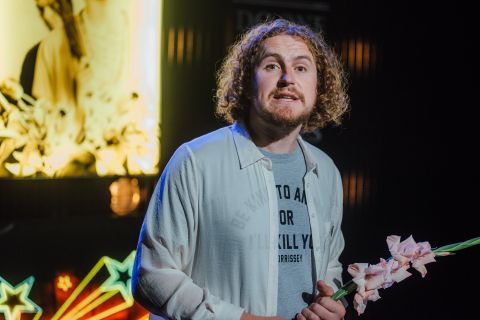 Teenage angst – we’ve all been there. Being ‘in with the out crowd’ is no joke. In this latest one man show from the brilliantly funny Gary McNair, we are made privy to his time as an anxious young man growing up ‘a loner’ living in ‘a shite town’ in the post punk era.

In a brutally honest monologue that’s laced with his trademark leftfield humour, McNair takes on the characters who featured at this excruciating time of his life when unwanted labels can stick like burrs till adulthood. Meet Mr McKinnon, the heidie, whose motto ‘Do one thing every day that scares you’ haunts every interview; his unfortunate best pal Tony; scary Jan the Lesbian fae Fife and of course Morrissey himself, a man who ‘dared not to fit in’ and to whom a teenager with no other outlet writes letters.

All this is done against a detailed re- creation of a teenage bedroom of the time with a backdrop of amber lights and the signature shooting stars of the Barrowland ballroom, impressively created by Ana Inés Jabares-Pita. Mellow sounds and insistent beats from Danny Krass echo the mood of McNair’s bravura performance under what must be the dream team direction of Gareth Nicholls, who also directed the two preceding parts of this trilogy by Donald Robertson Is Not a Stand-Up Comedian and A Gambler’s Guide to Dying .

This is a darkly funny and beautifully crafted piece of writing compellingly delivered with raw openness that sees the Christ- like image of a ‘boy with the thorn in his side’ navigating a route to acceptance from saying that he’s ‘fine’ to actually being fine.

This world premiere of Letters to Morrissey is part of the Made in Scotland showcase.