How to Act, Summerhall, Review 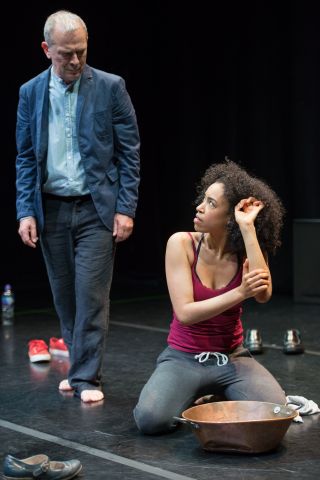 According to renowned theatre director Anthony Nicholl (Robert Goodale), theatre is dying. He is running a masterclass, no that’s too strong a term for this man whose linen jacket pockets are brimming with faux modesty. He wants to get back to theatre’s roots; to strip its clutter and let it be re-born.

Graham Eatough’s latest play is by its nature stripped back. Some of the audience sits on stage as if they are part of the workshop, some even lending their shoes so the great man can create a ‘sacred’ performance circle of them. He is harking back to experiences he had in Africa some years before. He picks a member of the group - fear not, it is always Promise! (Jade Ogugua)- to learn from the master by creating their story. The Nicholl character’s smug, arrogant and patronising behaviour is perfectly caught by Goodale as he carries on oblivious to Promise’s presence. Ogugua’s facial expressions as she is interrupted both verbally and physically are a joy to behold.

This is a man used to being in charge; a man who dons the cloak of liberalism but one lined with the residue of colonialism; a man who thinks that a little experience of a place overrides what is in the bones of people who live there. His just off beat claps to the steady beats subtly show that he’s not quite getting it.

Little by little, Promise gives an exposé of the harsh complexity of life from Lagos to London; of oil industry corruption, exploitation and injustice through a lithe and virtuoso performance from Ogugua.

In Eatough’s metaphor for “the West’s relationship with other nations and cultures which we rely on for …important resources” this man gets far more than he ever bargained for as two separate versions of truth are examined.

What truth is could be argued in finitum but what is certain is that How to Act is absorbing, challenging and clever. Not bad for something in its alleged death throes.