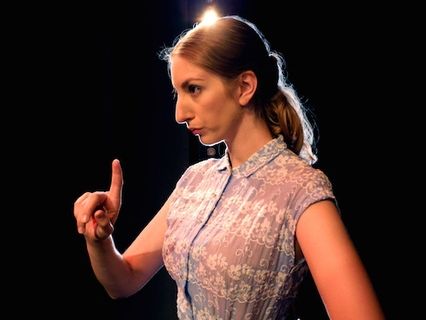 "In the fall of 1939, when I was 9 years-old, Adolph Hitler came to my neighbourhood. He didn’t come in person of course, but the idea of him came into people’s minds in Stratford, New Jersey."

Hitler is promising a better economy and new jobs in Germany and with America still in the grips of the Great Depression, Eleanor’s father decides to make the move.

Along with her German born mother and brother, Frank they board an ocean liner and watch with some sadness but also excitement about the adventures ahead as the Statue of Liberty disappears. And besides, in two years she will be back …

On arrival, with money already exchanged and her mother being a German citizen, they are trapped. As the Nazi forces march across Europe and the Japanese attack Pearl Harbor, America is drawn into a world at war. Eleanor is caught between the place she loves and the land of her ancestry. How can things ever be normal again?

This is Eleanor Ramrath Garner’s memoir adapted for the stage by her granddaughter. A coming of age story told against the horrors of war, from the insidious persecution of Jews to the eternity of nightly bombing that puts the civilian population on the front line.

Garner moves well between the various characters and makes use of the simple props to set the scenes. The multi-media content featured in previous productions is absent and it’s difficult to know how this has changed the immersion. It packs a punch but the words don’t always leap off the page, feeling more like testimony than theatre.

A more intimate venue might restore the balance, but here it’s a losing battle with noise breakout from not one but two shows running concurrently in neighbouring spaces.

A remarkable story which deserves to be heard.