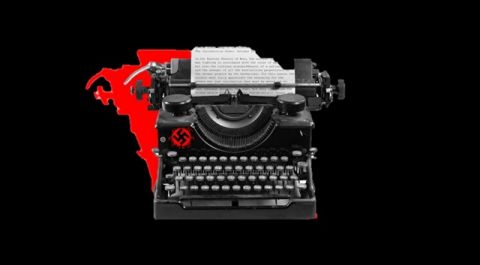 It is always good to get a perspective of otherwise forgotten women and their work and Bunker Girls offers a view of this in the time of Nazi Germany by focussing on the lives of two young women working as secretaries to Adolf Hitler.

Coiffed and dress in the style of the period, these two each vie for their Führer’s attention in their own way despite Eva Braun being established in Hitler’s intimate entourage. Their personal narratives are interspersed with bigger events like the arrivals of the Russians aka ‘Ivan’ and the fear that entails.

Amy Walpole’s just a bit too quiet voice delivers her lines as the diligent Gretel, who sits at her typewriter beneath a portrait of Hitler that stares out like a creepy pin up. In breezes Ilse, brightly played by Ruth Louis, dressed in fur coat and re- living their boss’s birthday party. Ilse is happy to be a kind of Gestapo geisha, available for tea and chats with the officers yet it is she who ends up next donning a soldier’s uniform, while the hard- working Gretel tries to desert. These roles create confusion in this over ambitious narrative at least in inexperienced mouths and the false ending is more distracting than dramatic.

The terrible sightlines in this venue could have been helped by situating the play’s main prop, the desk, in line with the passage way. Bunker Girls is earnestly produced and ambitious but lacks edge and humour and so disappoints.