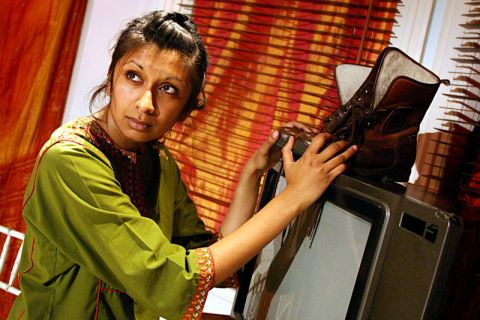 With sunshine striking the pavement outside The Counting House, one might wonder what might draw one inside, but ‘An Arrangement of Shoes’ proves an excellent diversion from the busy traffic of the Fringe. Abhishek Majumdar’s one-person play does not lack ambition, and Radhika Aggarwal gives of her best in bringing the character of Rukhsar to the stage.

Although largely set at the time of the First Gulf War, Majumdar’s play obliquely references a considerable amount of Indian experience from Partition on. The setting of a ‘railway colony’ itself reminds some of us at least of one of the more immediately noticeable traces of British rule, namely the sub-continent’s extensive network of railways and those whose lives, directly or indirectly, are connected to it.

Majumdar’s imagined family of Babajaan and Dadijaan (grandfather and grandmother), Abba and Ammi (mother and father) and sister Nisar are all given life through Aggarwal’s dialogue, and the experiences of many who have now grown to adulthood in an India very different to that of their parents and grandparents generations.

The shoes of the title serve the double purpose of being both the objects of a game in which the shoes of worshippers at the local Hindu temple and Islamic mosque are confused, as well as being symbols of connection, loss and memory. And, of course, not simply the objects of childhood pranks but in addition providing an echo of all the losses and confusions which Partition brought.

The Edinburgh Fringe is always unforgiving, and the star rating system unavoidably unfair. Reviewers are unable to take into account the less-than-suitable venue space, the inappropriate lighting rig and above all the productions seen necessarily early in their runs which will tighten, find their feet and run with the ball they have been given. One senses that ‘An Arrangement of Shoes’ may do all these things and very shortly reach the potential and audience it deserves.