All We Ever Wanted Was Everything, Summerhall, Review 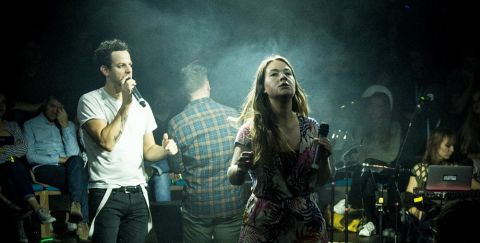 Part play, part musical, part indie rock concert, All We Ever Wanted Was Everything is the ultimate in immersive gig theatre.

Spanning three decades from 1997 to 2017, we see two hard-working families from Hull and their children’s journeys from an optimistic 90s upbringing to the bitterness of the breaching-Brexit modern day reality. The two central characters, Leah and Chris, are meant to represent us, the children-of-the-baby-boomer generation, looking for a life that will provide a sense of contentment and fulfilled dreams.

Bryony Davies as Leah is especially brilliant, such a standout actress. You genuinely feel as if Leah is real with memories, hobbies, and opinions. Davies has exact comedic timing, and a way about playing Leah that makes you love her in spite of the moments that she’s acting like an ungrateful brat. Marc Graham, our narrator for the night is frenetic yet focused, driving the piece forward while leaving hints of Emcee from Cabaret and Mic Jagger throughout the theatre. The six characters in total flow seamlessly from playing the music to performing the characters, switching effortlessly between instruments without letting the energy dip. A finely tuned machine.

Ultimately, All We Ever Wanted Was Everything has real characters with something to say about the so-called “entitlement generation”, accompanied by beautiful music from composer James Frewer and featuring clever dialogue throughout. The story is one that feels familiar but modern, although the ending of the asteroid hurling towards Earth feels a bit on-the-nose and disjointed. It’s a love story where the heartache lies in losing dreams and the world these kids thought they were inheriting.