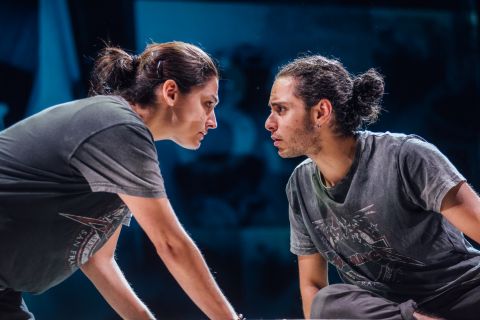 There is currently a giant image on the front of the National Gallery of Scotland advertising the exhibition Beyond Caravaggio. It shows the striking image of Galli’s painting Christ Displaying his Wounds. In this stunning new play starring Adam Kashmiry, who makes his professional stage debut and is the subject of

Adam, there are two scenes that evoke that arresting image.
One opens the play to set the mood and the other is further in the narrative chiming with the timeline of Adam’s story. It is the barely watchable image of a knife being aimed at that beautiful and vulnerable part of the female body, the naked breast, and when Neshla Caplan, who plays the other side of Adam, does this bathed in a light worthy of Caravaggio and his followers, it is powerful enough to stop the heart.

But that is one part only of this arresting piece of theatre that tells of a young person's journey from a female rite of passage of painful menstruation to trying to pass, in a world of raw maleness and a so-called sex cure, through the 700 days from arrival from Egypt to Glasgow where asylum is sought. The Arab Spring may have been erupting, but what was happening personally overrides these world events.

This determined and painful journey to become the man is shown on a raised reflective stage set like pewter Lego with white mannequin limbs strewn beneath from Emily James. Stunning visuals on the back screen augment the piece and play platform to the moving performance by the virtual choir of trans and non-binary individuals from across the world named the Adam World Choir. Adam tells of overwhelming courage and a positive side to the internet where it allows connection between otherwise isolated individuals in a good way.

Frances Poet has written a wonderful text scattered with humour that exposes the restriction of gendered language and how contranyms, words like ‘bound’ or ‘screen’ that hold contradictory meanings, are a great metaphor for Adam’s own double bind. All this under director Cora Bissett’s sure hand.

Adam has everything - not a mono blocked perspective but a multi layered view of one human being’s life. The redemptive conversation with his mother has the power to shatter your heart.

All round punch in the gut theatre not to be missed.

This World Premiere of Adam is Part of the Made in Scotland showcase.