Stop the Train (The Musical), Paradise in Augustines, Review 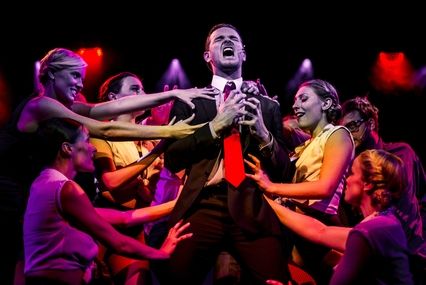 A ticking clock heralds the departure of the 7:53 train to the 9 to 5.

With repetitious movements and a forceful, catchy song our business suited commuters are clearly not looking forward to the grinding journey as they declare “there must be more to life than this”.

They are soon engrossed in their individual self-obsessed worlds of text, tweets and mobile phone calls. So much so that, when a careworn fellow traveller tries to engage with them he is shunned as the carriage weirdo. To be fair, he is a bit agitated and more than a little wired.

He rages against the irony of technology that connects them globally but stops them communicating with the person two feet away.

It appears that he has little to lose and with threats he gains their undivided attention; it’s time to share a few secrets. First up is a slightly underachieving family man Rhodri, somewhat gripped by the what-might-be, he is just waiting for that gambling win that will pull him out of a financial hole. In front of a projected Lucko advert and dancers with giant lottery balls we are treated to “Waiting for his Balls to Drop”. It’s at this point that you realise that this isn’t going to be the usual cookie-cutter musical.

His fellow passengers are caught up and well, at least they are now talking, if not exactly getting along. Two not on the best of terms are the wounded Chloe, furiously resentful at corporate-boy Tom who is infatuated with his career and screwing around. A big band number “Stop It I like It” sees him easily tempted as he comments on a dancer “She says I like to swing, but I don’t see her moving her feet”.

Other career choices come under scrutiny as Amy exposes the chip on her shoulder and an interest in cosmetic surgery in a plastic fantastic disco number. Self-proclaimed hottie Nicky has a plan to become famous by being famous and break into the premier league. Lawyer Bartholomew meanwhile finds that perhaps some things should be tolerated and it might be unwise to make hasty judgements. The question remains - will they be able to stop the train?

Each song is carried out in a different style accompanied by slick choreography against the video backdrop. The writing is sharp and entertaining and the performers have the triple threat; they can dance, sing and that rarest of musical theatre commodities, act.

The idea of building a show around train travel conversations may not be original (last year’s Fringe had productions of “Departures” and “Under the Ground”) and neither is the fairly simple seize the day sentiment. The central character (Eric) could be a bit more rounded and the projections could be given more space.

This production however transports a superb cast in a perfectly polished musical vehicle. It’s an absolute blast.