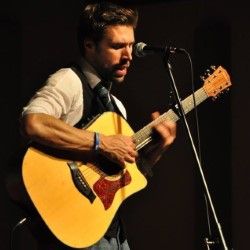 In a small, cosy space under a bustling pub in the centre of Edinburgh, Simon Kempston plays for a captive audience. The man, the voice and the guitar are enough to keep his audience smiling, listening and enjoying for an hour of peace in the excitement of fringe time.

Kempston himself is as unassuming as they come; he possesses a kind of laid back charisma and old school charm that entirely suit his style of music and underplays the genius that is his musical talent. It is clear that the guitar he plays has been with him all his life – it is like an extension of his arm.

The set he plays is a mixture of song, classical and instrumental music, and is entirely acoustic. Two guitars make an appearance, as do several knowing smiles as his audience laugh with his easy humour. His set is punctuated with openly honest stories of his life as an artist and the beautiful and varied inspirations for his songs.

This is a show with more than just music. But the music at its heart is sensational in the most literal sense.

Kempston’s genre is an acquired taste, but what he does, he does brilliantly.