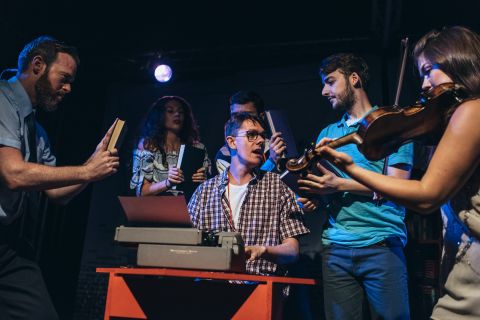 Found in a high street bookshop, Atticus (Adam Small) the talented but lethargic writer, lives through the times and strifes of the characters in his novel. He is forced to face his own realities when Lilly (Gabriella Margulies), an executive from an online bookstore, steps into his world. Within the pages of Atticus’ book “Angel Star” the complex story of Yanna (Sinaed Wall) and Issak (Matthew Atkin)begins to parallel his own life requiring him to finally take inspiration from his own experiences to conclude their tale.

Offsetting the beautiful complexities of the score, Lindsay McAllister’s simplistic choreography lifts the already stunning direction of Tania Azevedo. Lead by Small’s endearing portrayal of Atticus, and the hauntingly beautiful performance of Sinead Wall, the cast’s talents do not fault for a second under the weight of this exceptional piece.

Using every inch of their small stage space, musical director Daniel Jarvis commands a four piece band of actor musicians, who perform with inspiring accuracy throughout. The incorporation of Atticus’ typewriter as percussion adds extra depth to the aural delight that is O’Rafferty’s score. Scribed with such elegance and poignancy, this production breathes fresh air into the commonality of musical theatre love stories.