In her Own Words: The Diana Tapes, Space @ Niddry Street, Review 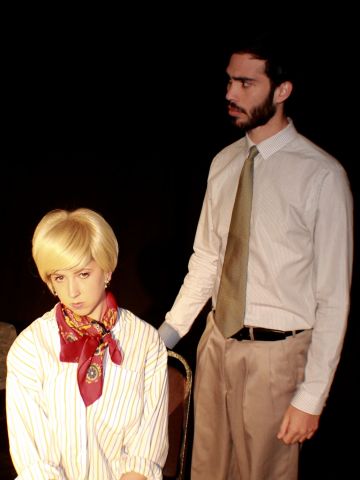 The publication in June 1992 of Andrew Morton's controversial biography “Diana: Her True Story” revealed her heartfelt confession about her disintegrating marriage to Charles, leading in due course to their separation and divorce.

It was adamantly denied that Diana had collaborated in the writing of the book and that Morton’s sources were Palace insiders and close friends.

This new play dramatises a few short episodes during the months before publication. The first scene is a cafe or bar with a table and two chairs, where Morton meets a friend, Dr. James Colhurst, a long-time confidant of Diana, (although this relationship is not explained). James places a tape recorder on the table and a short extract can be heard in which Diana describes suffering from bulimia and how she found cufflinks with two entwined Cs. “My hushand makes me feel inadequate,” she states coldly.

This interview is pure dynamite for Morton, journalist, royal correspondent and biographer who has been entrusted by Diana to compile her Memoirs through secret tape recordings. At his publisher’s office, Morton explains that he will supply the questions and Colhurst as the go-between, will record her answers. Michael O’Mara realises that these explosive revelations “.. will be the biggest royal story for half a century, since the Abdication.”

The next scene is presumably Diana’s sitting room in Kensington Palace but most curiously it’s the same cafe table and chairs. James arrives with his tape recorder for another session. Wearing white Capri trousers, striped shirt, red patterned scarf and blonde bob wig, she describes how the Queen saw her falling down stairs at Sandringham. “By any luck the Queen Mother will be dead by the time the book comes out” she laughs but sounds nervous. She assures James that she finds recording the tapes to be “exhilarating.”

And so we observe the plan of action in process, recording interviews, surreptiously handing over tapes in the bar, and the constant threat of a media leak about the biography. These real life events, orchestrated by these four people hatching a devious plot, should create a thrilling scenario but unfortunately the character acting is stilted and unnatural with an array of accents by the international cast.

It’s all slow paced apart from when a chair is pushed over and pages of white paper are scattered on the floor - but why is this not an authentic typescript? While the actors regularly change costumes to indicate passage of time, the static stage set for Bar, Office and Palace gives no sense of place or atmosphere.

Please correct the errors in the script regarding the terms, Queen of England and future King of England. The British Monarch reigns over the United Kingdom and the Commonwealth. The words Queen and King will suffice.

The writer, James Clements takes on the role of Andrew Morton with an authoritative manner. He has a striking resemblance to the biographer and portrays an ebullient personality switching from cocky, cool confidence to a fear of the consequences.

This 55 minute Fringe play can only relate a fragment of the extraordinary investigative journalism involved and the Royal Scandal which followed.

After the theatrical masterpiece, Charles III, a full scale, properly staged, expanded version of “In Her Own Words” would develop the background, enhance the characters and dramatic tension behind the writing of “Diana – Her True Story:” As we approach the 20th anniversary of her death, this would be timely and poignant.