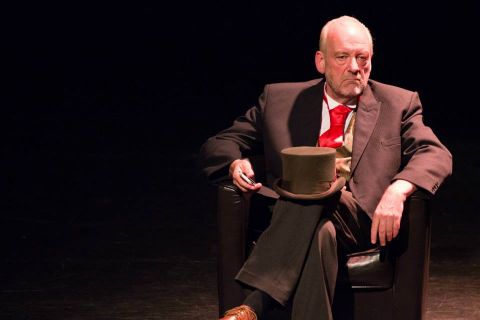 Plans for a quiet, retired life by the sea are not going to plan for John Davis. He is hearing voices. And they all belong to the dead.

Roused again from his slumber he thinks that he may be going mad, and it’s getting worse. There are blanks in his memory and it appears that he is playing host to Inspector Frederick George Abberline, the man who never caught Jack the Ripper.

It seems like the investigation might be reopened when a wooden box found in the cellar reveals a map of the Whitechapel murders and what appears to be souvenirs from the Ripper’s victims.

The focus of all the subsequent inquiry, all the books written has been on the identity of the murderer, but Abberline just wanted him stopped and justice for the dead. He wants their voices to be heard, and perhaps to feel absolved of guilt himself.

With a Victorian interest in mediums he turns to the audience to become a spiritualist group, to use the keepsakes to channel the women who were brutally slain. As each victim is prompted by their personal belongings he seeks to finally allow them to rest in peace and gain their forgiveness. One by one the items are transferred to his case, but can it finally be closed?

This is a well performed piece, from the haunted Mr Davis to the gently spoken, conversational Abberline. A switch in focus allows the audience, thus far ignored, to be drawn into the production. The script however never fully satisfies. For all the good intentions of lifting the victims from the page as mere characters in the Ripper story, we don’t actually learn much about them.

The technical aspects also hinder things. The audio voice-overs that allow the women to speak are robbed of any “beyond the grave” quality by rumble and hiss. The lighting is awful both in design and execution.

Just like Abberline, the play fails to nail it in the final act.