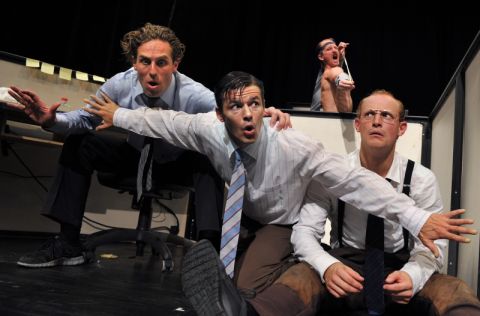 Not for long though, as four office workers embark on a journey that brings favourite superhero movie characters and villains to life, and creates an imaginary game where everyone is involved.

Co-directors Kristjan Ingimarsson and Simon K. Boberg create an effective dramatic crescendo for the whole piece which keeps the audience on the edge of their seats throughout. A big crowd-pleaser, it gives the audience a little slice of action at a time, building to a spectacular finish.

Credit must be given to the performers: Janus Elsig, Joen Hojerslev, Eos Karlsson, and Anders Skat who, despite a few messy hiccups (perhaps due to the exciting nature of the piece), are five fantastic and energetic performers. They are an impressive group who engage the audience in laughter as well as their extraordinary tricks. These tricks would not be the same however, without Svend E Kristensen’s action-movie sound effects which heighten the performance and add that extra cinematic theme which is apparent throughout.

Kristian Knudsen's set slowly transforms from a typical office into a jungle of the imagination where coat stands are turned into machine guns and water coolers are transformed into intriguing alien-like characters. The set seems a little flimsy considering the bashing and crashing the performers subject it to - one can only hope it will last for the full run of the Fringe.

This is a feel-good show made for people of all ages who are interested in superheroes and action-packed fun. If all office work is as fun as BLAM!, the dreaded Monday mornings might become a thing of the past.