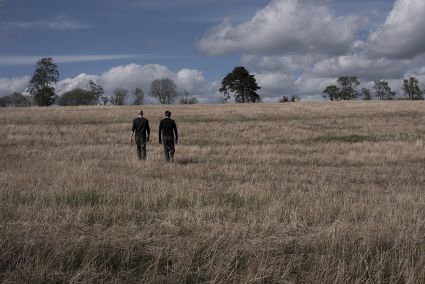 Company of Wolves, regulars to Summerhall, return this Fringe with their new performance ‘A Brief History of Evil’. In the company’s usual style, Ewan Downie and Jonathan Peck explore the lies we tell ourselves and perhaps the hidden evil in our words and actions through intense physicality, animalistic noises and progressively manic speech. Light-hearted yet devilishly dark, the audience is confronted with an inherent evil within us all.

Beginning with an unnervingly friendly welcome ‘A Brief History of Evil’ gradually spirals out of control. As the puppet becomes the puppeteer the two men bounce back and forward, interchanging personalities, thoughts and physicality as they challenge each other’s perceptions of how we should portray ourselves. Is it the truth that’s evil?

In such close proximity the piece is an intimately human one. The actors make direct eye contact with each audience member, the smell of dripping sweat fills the room and the veins on Peck’s head can be clearly made out. The physicality of the actors is something to be commended; particularly Peck who’s twisted and tensed limbs are the embodiment of a grotesque villain.

The two actors complement each other in a Dracula and Renton type relationship. The master and his minion. However, these roles change fluidly and are not fixed to one character. At times the connection to the actors was unfortunately lost as their speech and movement became internalised within themselves or between each other which could sometimes exclude the audience.

Some of the box moving scenes seemed unnecessary, however in such experimental and intense work it did suffice as a break in the incredibly strenuous physical and vocal body of the show.

The use of repetition, contact improvisation and breathing, a common feature in their work, was also well executed to help build the show and provide an underlying rhythm.

A powerful exploration of our inner evil, prepare to feel exhausted after this one.