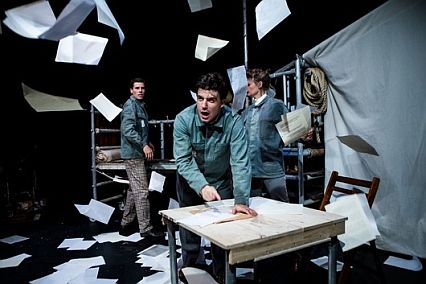 Sitting in the belly of the great ship SS Triumphant on route to a brave new world, B would like to tell you about himself. The problem being that he has completely forgotten what he was about to say. You see, thinking gets messy.

If only he could pull himself together. And that appears to be part of the problem as he is played by four actors. These unreliable narrators will lead us into the depths of the ship, his memories and his suffering.

On a breezy tour of the decks, B learns from fellow passengers that the World Chess Champion, Mirko Czentovic is on board; a prodigy who perhaps has sold his soul to the devil and is said to only dream in black and white.

B hasn’t touched a chess set in years, and perhaps with good reason as it had been an obsession for him - one that both saved him and fractured his mind. He has played countless games against himself, learning from mistakes and memorising the ever expanding number of possible moves from opening to end.

As B describes the match his memories blend and shift, sometimes linear, sometimes tangential; play, counter-play, defence and attack. Memories still fail to come together. The touch of a hand triggers a memory of Anna in his office in Vienna back in 1937. He is protecting people, hiding files from the Nazis in the run up to the annexation of Austria. Captured and held by the Gestapo in solitary confinement everyday is the same, differentiated only by the smallest detail. When he gets his hands on a book of 150 Great Chess Games he loses himself in it.

He recounts the game in the storm tossed ship, but if there was a mistake made and if even he can’t decide on the ending, who has won? He will be offered one final move, from which there will be no return.

This psychological and physical play reveals a tortured and traumatised mind through a game of chess with clever use of light and dark. The cast move and speak with choreographed grace to capture both dramatic and almost clown-like moments. Trademark cinematic moments see torches used to produce simple shadow screen projections with great effect and throughout the percussionist’s often strident, sometimes skittering drum beats match the action. Credit must also go to the technical aspects which give the production a rich filmic feel.

Undoubtedly the company’s most adventurous and successful Fringe outing to date.