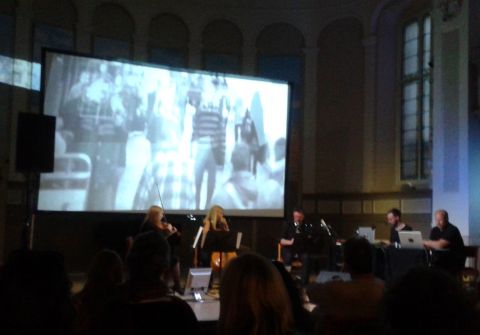 As a "digital opera", lasting just over an hour, this was a provocative and profound production, based on the life of Edward Snowden - the former US government employee who allegedly leaked many classified documents to journalists, and who is still a subject of international controversy. We were encouraged to think about how his own experience might inspire ourselves to think of issues of personal privacy, espionage and surveillance.

The event was certainly thought-provoking and engaging - and people appeared challenged and moved. The musical aspect of the performance was especially inspiring and stunningly crafted. Very talented musicians helped make this into an evocative - and sometimes emotional - experience.

At some points, however, it was unclear how the visual images, displayed on a projector, applied to the underlying narrative - which was, in itself, somewhat ambiguous: the event being entitled "A Requiem" - a term normally used when referring to the departed. Nonetheless, the instrumentalists performed with incredible flair; in the Programme, we were asked to be "agitated, provoked into thought in some way" - and indeed: this was an interesting performance to hear.