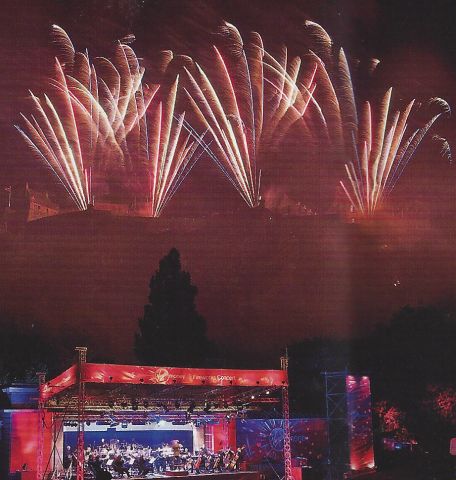 I've been a regular at the end-of-festival Fireworks for some years and this year's was the best yet.

Even the forecast rain kept off on what had started as a pleasant evening until two minutes before the end. My ticket was for the Gardens where you either sit on the grass or a park bench. Regulars know that the view can be spoiled by trees and so there are clusters of hundreds of people dotted around the vast viewing area. There seemed to be a proper programme for everybody and the very clear announcements were expertly timed. In previous years there had been frustration at the gaps between each piece of music. This year the gaps seemed to be shorter. It was good to have had explained the need to move fireworks into place during the gaps.

Garry Walker was conducting the Scottish Chamber Orchestra on the Ross Bandstand and could be seen on screens around Edinburgh. The music this year was chosen to celebrate courage, heroism and struggles for freedom. Each of the five pieces were uplifting and many months of hard work had gone into co-ordinating the release of the fireworks in sync with the music.

When Debussy's March Écossaise was reached some of the fireworks started to trickle down the Castle rocks. But it took the final 1812 Overture with bright red fireworks at its start before the hugely spectacular cascade down the rocks came into sight.