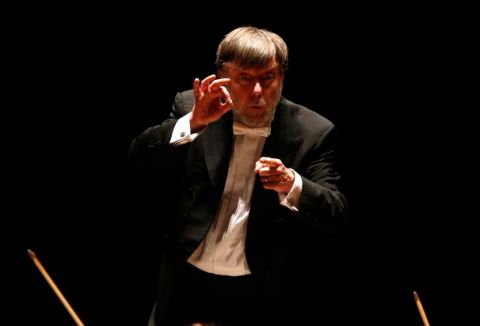 The Melbourne Symphony Orchestra gave a capacity Festival audience an evening to remember with a programme providing insightful rendition of widely differ genres. This reviewer was slightly disappointed that there was nothing by Australian composer Peter Sculthorpe, who died earlier in the month.

Don Juan, by Richard Strauss, is an oft-performed work but the verve of Melbourne’s output was among the best heard in some fifty years of concert-going. Andrew Davis enthused the musicians while giving full regard to the interplay of the various sections. The brightness of brass and apposition of mellow woodwinds were carefully gauged.

The orchestra’s qualities were possibly too much exercised in accompanying soprano Erin Wall in Four Last Songs. These settings of poems, three by Herman Hesse, were composed at the very end of his life and first performed -in London by Kirsten Flagstad – eight months after his death.

They were sung movingly, with Erin Wall successfully conveying the mood of resignation and pathos in what is generally regarded as a testimony to his wife Pauline. Unfortunately, for most of the audience, many of the lower notes were drowned by an orchestra which flouted repeated attempts by Davis to keep the volume down.

Much better was the rapport between orchestra and soloist in the Cello concerto, though even here there were signs that Truls Mork was not entirely comfortable. His technique brought out Schumann’s intrinsic lyricism in a hugely appreciated, well-rounded, reading. Many music-lovers who recognise the name “Grainger” immediately think of folksong and Country Gardens, for that was the foundation of his success.

He was a brilliant pianist, highly regarded by Greig and Delius, and must have been something of a child prodigy as he left his native Australia at 12 to study in Germany. He moved to London in 1900, where he was feted as pianist and arranger of traditional song. Most of his large body of compositions date from this period, up to 1915 when he went to America, where he spent the rest of his life. He only wrote five purely orchestral works. The Warriors, completed in 1916, was the last of them.

Called experimental and eccentric, it never entered the regular concert repertoire. Not surprising, as the score calls for a large orchestra, three harps, three pianos, 19 percussion and an off-stage brass band. The Usher Hall performance made do with two harps, nine percussion, and five brass, who left the orchestrae for a period to play offstage.

The result was astounding. Though Grainger specifically denied it represented war, the clamour at full volume and quiescent lulls were reminders of battle. A single hearing raised questions but there was no doubt the work had merit. The evening ended on a delightful note – Davis showed the orchestra’s full strength - and his physical ability – with an extended encore orchestrated by Sir Henry Wood.