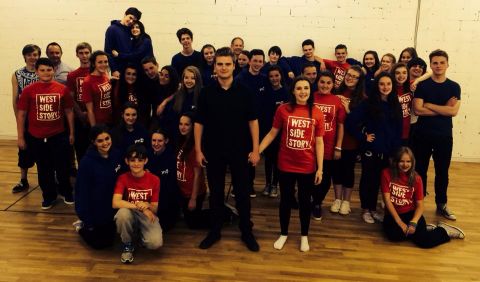 The gangs of New York are in residence at Edinburgh Academy and are kicking up a storm in this production of this classic musical.

The Youth Music Theatre of Scotland proves that there is an abundance of home-grown talent.

The show was backed by a youth orchestra that deserved to come out front and take bows alongside the cast as they worked their way through Bernstein’s score.

The orchestra is worth the ticket price alone but it provides the platform for a large and talented cast made up of the Puerto Rican Shark and the ‘indigenous’ Jets. It is the conflict between the groups which provides the backdrop for the love affair across the great divide.

There are a number of great performances and none better than Hannah Visocchi as Anita who surely could not be topped on the professional stage.

‘Tony’ played by Robert Forrest has a fine singing voice especially demonstrating the power that some numbers require. Tony plays opposite a fine performance from Katherine Skene as ‘Maria’.

While their voices blend effectively perhaps a little more chemistry could be injected into the love scenes to make sure the audience care about the outcome of their love affair.

This is a challenging show for both director and choreographer but the creative team and cast produce dancing and movement that is always fast and interesting.

The ensemble pieces as well as the main songs are well sung with a wall of sound hitting the audience. Niamh Corkey is impressive with the tender ‘Somewhere’.

If the production has a slight flaw it may be that the Jets are not that mean and nasty until near the end and they need to look and sound a bit more like a gang. Sometimes it was difficult to know which ‘gang’ was which and maybe the costumes could have taken more of a ‘uniform’ look.

Having said this, YMTS deserved the applause and the full house for what was a first class production of ‘West Side Story’