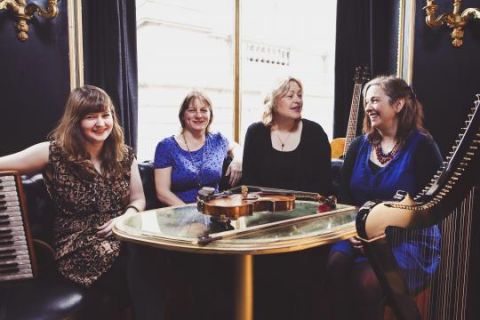 After her recent brush with fame as a finalist on The Voice, Sally Barker is back to her roots as lead vocalist in the all female folk supergroup The Poozies, serenading us once again in the less competitive but more atmospheric and intimate setting of The Speigeltent.

Its packed out and I’ve barely sat down in one of the wooden mirrored booths with a half decent view of the smoky stage when the lights change and they’re suddenly on. This supremely gifted quartet waste no time in getting down to business, quickly putting the audience under their spell with their soothing and toe tapping range of celtic ballads, gaelic tunes and stirring vocal harmonies.

With Barker on guitar, Mairearad Green on accordian, Eilidh Shaw on fiddle and Mary Macmaster on electric clarsach, this quartet of voices and instruments often sound like there’s another four of them onstage, such is the layered richness of the sound.

Of the dozen or so numbers there’s a mixture of covers, rearrangements of traditional classics and some original material written by Barker herself. One such number, Ship of Love co-written with colleague Macmaster is a shamelessly uplifting singalong tune and even my shy old self found himself joining the choreographed audience in making the relevant movements accompanying the chorus.

This just underlines that not only can they dazzle with skillful and soulful artistry but watching a Poozies gig is good fun as well. They don’t take themselves too seriously and get a good few laughs with their self effacing banter and playful cheek, even managing to salute the RAF jet flyover on its way to the military tattoo during a song.

The song in question Southern Cross is incidentally my favourite from their set, one I had the pleasure of catching live before and it still sends tingles up my spine. Written by Andy Griffiths it is apparently inspired by a tale of sailing the seas in the German Navy during the Second World War in a ‘pirate’ warship.

The accuracy of these ‘facts’ may need some verification but whatever the source of the lyrics its a powerful and moving ballad with Barker’s vocal range during the chorus threatening to get me all misty eyed. It may not be pop or rock-n-roll but its got hit song written all over it.

Soulful ballads and gaelic tradition eventually give way to a medley of foot stomping polka action with Eilidh Shaw furiously sawing away on her fiddle and for the finale they round off the evening with some impressive harmonies in an acappella rendition of Laura Veirs Black Eyed Susan.

Its a pleasure to watch such gifted musicians at the top of their game because the experience is joyful and effortless and whilst the bulk of it is rooted in traditional music this is no twee diddly aye outfit. Their arrangements have a contemporary edge that makes you wonder if at any moment they might suddenly start rocking out or become a punk band. Even their name is a little bit punk, taken from a pub ‘Poosie Nansies’ that Robert Burns frequented. Poosie means ‘pussy’ and no not the cat variety. Punk or not, this group have plenty more to offer and like the seafaring souls of their lyrics still have a long way to sail.

The Poozies Fringe run has now ended. For details of their November tour click on the first link below. Poozie member Eilidh Shaw also performs as part of Damian Helliwells Metta on August 19th, again at The Spiegeltent at 8.30pm. Click on the second link below for more details.