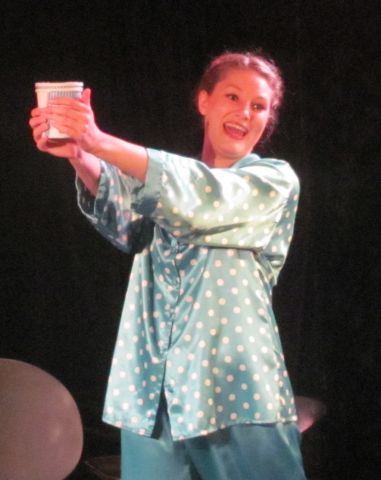 ‘She loves me’, she loves me not. Sadly, I fell into the latter category. This musical, set in difficult times in 1930’s Budapest never hooked me in despite the story being charming if a little predictable. Apparently it spawned the romantic comedy film I’ve Got Mail with Meg Ryan and Tom Hanks but their characters were more attractive than what’s on offer in this show.

Being set in that era, it has the stiff formality that is admired by many in period drama.

Many a musical with an inconsequential plot is lifted by the quality of the music but Jerry Bock’s score may carry the story, but does little for this soul.

Having said that, there are some good performances to admire. Laura Potter as Miss Ritter is at ease with the songs and her dialogue, especially her comic touches. Will Trafford as the married clerk with most to lose plays that part very effectively. Mr Maraczek, the owner of the Parfumerie where the rest of the principals work, ages the part well as the boss who like everyone else has the wrong end of the stick.

The story is about the relationship between George Nowack (Jon Bisby) and his anonymous penfriend and a colleague Amalia Balash (Abby Purdy) who works at the Parfumerie and also has a penfriend that she has not met. Ok, you are there already but that takes about 100 minutes to sort out. Both sing well and have a good stage presence but with the exception of the title song I thought the material uninspiring. The production moves along at a good pace with the use of the concierge a good touch. Erin Santillo ,the maitre d' has a cameo part but does it with flair.

The venue space is comfortable with three rows on three sides but occasionally the actors sang to the back of the stage and lyrics were not that clear.

The cast can be satisfied with their performance and at least one member of the audience visible to me had a permanent smile on her face and seemed entranced with the show.