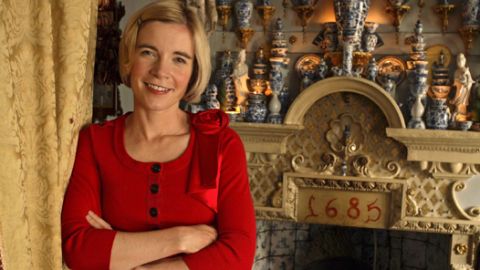 Historical and cultural BBC documentaries have recently become so much more interesting, especially when you have a vivacious, watchable presenter like Dr Lucy Worsley.

TV celebrities draw a crowd – this was a sell-out show in the Music Hall, Assembly Rooms for her Spoken Word presentation. People love her cute, quirky manner – informative, fun and entertaining. And her iconic look, standing on stage in a red vintage-styled cocktail dress, matching lipstick and trademark blonde bobbed hair-style.

Fashion is obviously a passion – a recent series was Tales from the Royal Wardrobe, describing the gowns and garments of British Monarchs over the centuries.

In her introduction, we learn that by day she is Chief Curator at Historic Royal Palaces with an office at Hampton Court. By night she’s a writer of history books. But her secret pleasure is murder most foul in fact and fiction.

She quotes from George Orwell’s 1944 essay on the Decline of English Murder:

“It is Sunday afternoon, you put your feet up on the sofa, settle your spectacles on your nose, and open the News of the World. Roast beef and Yorkshire has put you in just the right mood, the fire is well alight. In these blissful circumstances, what is it that you want to read about? Naturally, about a murder.”

With illustrations, photographs and newspaper extracts on a large screen, we hear how our fascination with murder cases and detective fiction developed over the past 200 years.

As an historian, she investigates the circumstances of a crime to find the truth and learn about society of the period.

In 1811 there was a brutal murder of the Marr family - parents, child and an apprentice. It was a shocking incident but no one was ever convicted, this being before the creation of the Metropolitan Police service.

Long before Dr. Shipman, another serial killer was Dr. Palmer who used strychnine to dispose of his victims. A satirical toast “What’s your poison?” was coined at that time.

A notorious case in 1827 was the cold blooded murder of a young girl Maria Marten by her lover William Corder. The tragic romantic story was dramatised as a melodrama, The Murder at the Red Barn, inspiring popular folk songs, and the sale of puppets, dolls and souvenirs.

Dr. Worsley explains the background to Arthur Conan Doyle’s brilliant characterisation of Sherlock Holmes and Dr. Watson, based on Doyle’s tutor at Edinburgh medical school, Dr. Bell. The aim was to have a sleuth who solved crime just as a doctor would investigate illness, through observation, clues and scientific research.

Fascinating to hear that French Police were encouraged to read Sherlock Holmes in order to pick up useful tips in the art of detection.

We speed through the golden age of the genre, dominated by women writers, Christie, Sayers, Allingham and Marsh; crime fiction has evolved today into dark psychological thrillers, far removed from the cosy classic style of 1930s murder in the Vicarage.

“A Very British Murder” by Lucy Worsley is published by BBC Books.