Donald Robertson is not a Stand Up Comedian, Traverse, Review 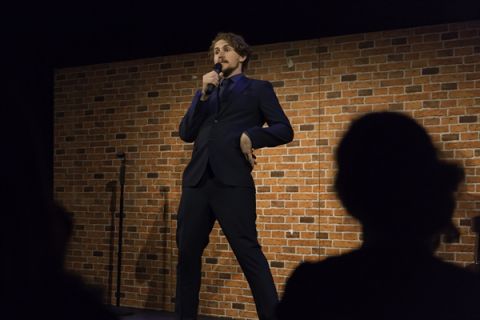 The Traverse Theatre has an uncanny ability to transform itself, at any time, in order to suit any requirements. For "Donald Robertson is not a Stand Up Comedian", the space had been neatly converted into a cabaret bar, complete with round tables scattered under spherical, orange paper lampshades. On stage, in front of a wallpapered backdrop of bare bricks, were the traditional tools of stand-up: a bar stool and a single microphone stand. Tom Jones hits were playing in the background.

This new play by Gary McNair offered a clever deconstruction of the art of comedy, examining who and what we laugh at - and why. Opening the show as a nerdy, contrived comedian, he began with some really bad jokes. This was a brave move and a smart one, providing McNair with the opportunity to supposedly explain the method behind his mediocre madness.

As the performance progressed, what he actually revealed was himself: unwittingly showing how his ‘kill or be killed’ attitude to life and comedy had developed out of his experience of being bullied at school.

The bulk of his routine focused on how he tutored a young lad – Donald Robertson – whom he met on a bus, dishing out the wisdom of experience along with his best jokes, in a bid to help Donald escape the bullies and gain the acceptance of his peers. This was an artful design, allowing for layers of pretence, bluff and double-bluff that ended with a twist in the tail to die for. Cunningly entertaining.