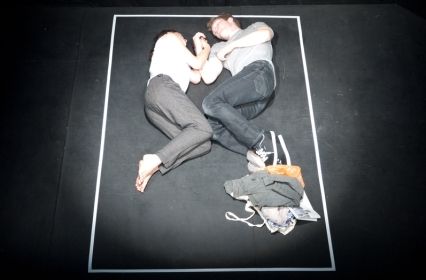 This lift is going up. Except that it isn’t - it’s stuck between floors and the two occupants are going nowhere, other than down into memories on which they would rather keep the doors tight shut.

What starts as a short trip becomes a claustrophobic journey into the much smaller spaces of the minds of the young man and woman that will uncover issues of control, freedom and self-imprisonment.

Beyond the nervous laughter and the small talk, the pair resort to games - I-spy, noughts and crosses. The only thing they can’t play is hide and seek. In the glare of each other's attention they begin to tease out details of past lives and relationships.

She is in danger of becoming the typical “cat-lady”, shunning relationships but still admitting that living on her own is rubbish. He is struggling, almost split between his civilian present and his post-traumatic soldier past.

They will project their disappointment in themselves onto each other as the hours tick away, pushing each other’s buttons. She picks anxiously at her elbow, as if at a scab, and picks at him, expecting him to be a hero. Just as the lift won’t work he has been left in part an ineffective machine.

As the water runs out and the panic sets in, the lift seems to shrink, reducing each to an inner world. While they could do anything in the lift and no-one would know, it may be safer to stay inside their own confining comfort zones.

This is a tight little psychological drama, interestingly staged within a taped-out area of a black-box, thrust theatre with seating on three sides.

While this should provide more intimacy, the audience may feel more like voyeurs, never really getting into the space that the actors inhabit.

The performances are strong and believable, mixing the realistic with the stylistic. The use of repeated tics, throat clearing, coughs, hand rubbing and movement to indicate passing time and monotony is interesting but jars a little.

The simmering sexual tension and sense of threat seems to diminish over the piece and, while not all works need a climactic end, it feels a little stalled.