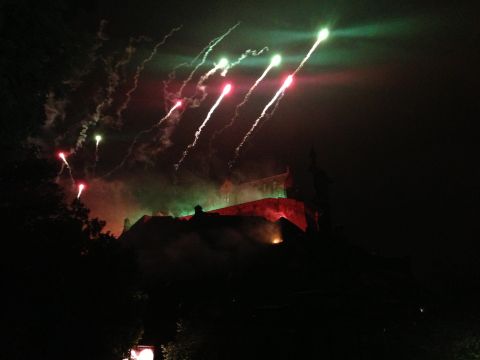 After an awkward flurry of Smetana - Dance of the Comedians - Garry Walker and the Scottish Chamber Orchestra got down to business with Ravel's orchestrated version of Mussorgsky's Pictures at an Exhibition. The latter was an obvious choice for the Fireworks concert - it had to be done at some point.

The SCO were on fine form, but I couldn't help wondering if they missed a trick. The Princes Street Gardens were packed full of would-be concert-goers - snuggling into tartan rugs, sipping hot toddies, with cheeseburgers in hand - and this was the moment to grab them! Why was the SCO's next performance not advertised in the programme - or anywhere? With something a bit flashier and a bit of PR splashed around, the shining bounds of Edinburgh's orchestra's army of supporters would have easily increased.

As we marched from picture to picture, it was hard not to be thrilled by haunting music of the pictured castle while fireworks fizzled around Edinburgh's own. At times the spectators seemed to lose interest in the music, which became for them background noise to the fireworks. Something punchier would have kept their focus.

Nevertheless it was wondrously magical for the musically aware, and for all, as the sensationally spellbinding Great Gate of Kiev opened its mighty gates for the glorious conclusion. An unmissable treat in all its majesty, which was utterly spectacular.