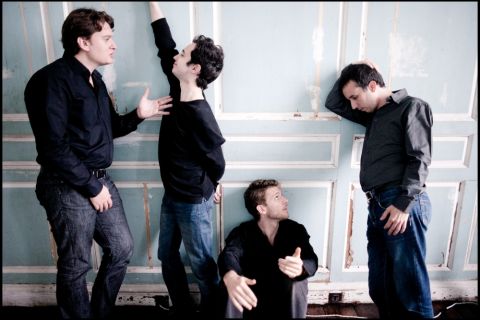 An utterly pack-out Queen’s Hall (again, as before, with some of the audience forced unnecessarily to be chair-less and hanging distractingly over the balcony) was excited to hear this final Queen’s Hall performance as the Edinburgh International Festival draws to a close. Generously sponsored by Donald and Louise MacDonald, this Saturday morning’s choice, Quatuor Ebene consisted of four superbly flexible artists, whose varied programme was outstandingly well performed in each of the various styles.

Crisp, fresh and lively Haydn was complimented by impeccably impressive ensemble playing in Bartok’s Quartet no. 4. In Mendelssohn’s Quartet no. 2 – written when the composer was 18 and had just fallen madly in love – the sense of wild passion, charming romance, flirtatiousness and longing were admirably captured. After three call-backs, we were offered a thrilling treat – the quartet’s rendition of Mile Davis, which was performed (after a little acting!) with swooping glissandos, wild dynamic contrasts and a mad splash of jazzy flair.