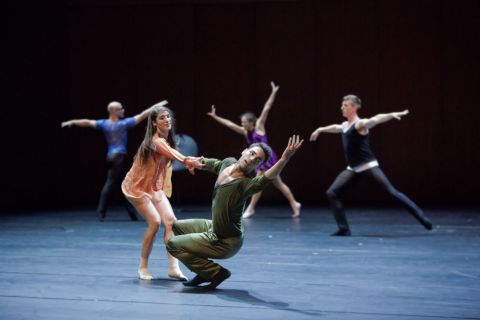 L.A. Dance Project is an artist collective co-founded in 2012 by the choreographer/dancer Benjamin Millepied and composer Nico Muhly with associate artistic producers.

Millepied is French for one thousand feet, which is rather appropriate for his profession! He is recently renowned for his choreography and appearance in the Oscar winning movie, Black Swan, starring his wife Natalie Portman.

The mission is to create exciting new work complemented by seminal revivals from influential dance makers.

Flat screens like colourful abstract paintings featuring letters and numerals are wheeled across the stage. These create a changing backdrop like graffiti messages. Five dancers, 2 women, 3 men, are in black underpants, T shirts and vests – as well as socks! – as if they are working out at a fitness class.

Music for violin and clarinet by Nico Muhly is performed live on stage with the addition of a pre-recorded organ, a curious medley of jazzy lyrical melodies with sombre Sunday church tones.

The continuous movement is playful and sporty with yoga–style floor work as if exploring physical dexterity of the body. The pace slows for a beautiful balletic duet with two men, as organ chords crash loudly combining with harshly plucked violin strings.

Darkness descends across the stage for Winterbranch, a distant hum is heard as a figure slides across the floor, only the feet spotlit. A flash torch suddenly reveals the brick wall of the back stage, Fire Hose, props, flats.

Merce Cunningham requested that the lighting design denotes night time with shapes seen partially or not at all like car headlights catching a vague image for a second. Suddenly a dissonant soundtrack (La Monte Young) breaks the silence with a piercing screech.

Challenging to the eye and ear, this surreal minimalist performance is akin to the provocative social sculpture of Joseph Beuys, blurring the boundaries between art and reality.

A release of true emotion is expressed in the gentle, graceful Quintett by William Forsythe. This was created as a tribute, a final love letter, to his wife Tracy-Kai Maier who was terminally ill. She died at the age of 33 and never saw it performed.

A haunting chant “Jesus’ Blood Never Failed Me Yet” by Gavin Bryars, is played in a looped recording of the spiritual song by a homeless man.

A quintet of dancers, colourfully dressed in shades of blue, pink and purple, waltz in wide circles in fast-flowing duets and solo moves with youthful energy and joy.

A sense of freedom in the choreography illustrates a celebration of her life, reflecting her resistance to accepting death, her rage against the dying of the light.

Utterly moving and memorable in its pure simplicity of song and dance.