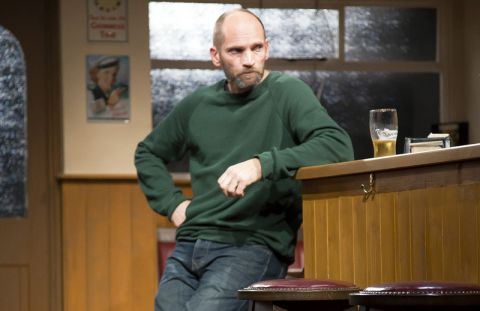 Two men in a bar are liable to start talking to one another, and football is often (supposedly) the medium that carries their messages.

So you might imagine two men in a Belfast bar with a game between Northern Ireland and Poland going on in the background might find they have something in common.

This, however, is Belfast, and despite the Peace Process – note the second noun – people still have difficulties in talking across the barricades.

The Ian and Jimmy of Owen McCafferty’s play do have one thing in common; however, it’s the one thing they both find most difficult to talk about.

Jimmy has summoned Ian for a confrontation of their common problem that Ian, for reasons we only gradually come to understand, is most reluctant to undertake.

Robert, the Polish manager of the bar this unlikely pair has chosen for their rendezvous, watches impassively as they replay one of the worst days in both their lives.

McCafferty’s play is, of course, about far more than two individuals. For one thing Belfast and its past broods over all, as if the Goliath crane, symbol of Belfast’s once proud, now troubled ship building, had intruded itself into the tiny bar in which the action takes place.

The past is palpably a presence in McCafferty’s dialogue and the actor’s interpretations of this ill-matched yet surprisingly similar pair are never less than a joy to watch, even in the earliest part of the play, where McCafferty, like his characters, seems to be halt before the enormity of the task he has set both himself and them.

For this is a very brave attempt to set records straight, not only for Jimmy and Ian, but also for both perpetrators and victims of what are too easily classed as ‘The Troubles’, suggesting that with their end the trouble they have brought families and individuals can end neatly too.

The Farset River that gives Belfast its name now runs below rather then through the city, much as what was once overt violence is now largely covert prejudice; out of sight but not out of mind. McCafferty boldly grabs the unspoken by the throat and bids it speak its name. What makes ‘Quietly’ remarkable is his achievement in suggesting how those used to living in their own pasts may yet arrive at a collective future that does not deny history, but can nonetheless face it with dignity.