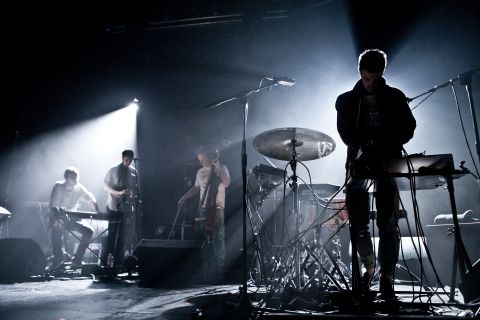 The multi-purpose festival stalwart that is The Assembly Rooms is many things, but a good gig venue it is not. Then again, perhaps it is ideal. After all, tonight’s Portico Quartet show in The Ballroom is set in a stiflingly warm atmosphere with the audience penned into cramped, uncomfortable seating while the bar is charging a frankly insane £4.60 for a pint of weak lager. So, pretty much the regular over-priced cattle pen which gig-goers have to tolerate.

It’s not helped by a seemingly strict showtime of 9.30pm which comes and goes with the audience still queuing out in the street before being ushered into the Ballroom where absolutely nothing happens until the back of 10pm and yes I know I’m complaining, but it’s warm and it’s busy and it’s expensive and if you say showtime is 9.30pm then, in Edinburgh in August, please make it so.

Anyway, gripe over, Portico Quartet have come a long way musically since their jazz-oriented debut album was nominated for the Mercury Music Prize in 2008. Their sound is now a melange of Jon Hassell’s Fourth World explorations and the more refined climes of dubstep, while their instrumental set-up is predominately electronic-based with only Milo Fitzpatrick’s double bass and Jack Wylie’s switching between tenor and soprano sax offering any kind of visual link to their jazz past.

Much of their music is still dominated by percussion instrument the hang, as played by Keir Vine who straddles this odd-looking bulbous metal object resembling an upside-down wok. Tonight’s short (less than an hour) performance focuses on last year’s eponymously titled album “Portico Quartet”. Tracks like “Window Seat” and “City of Glass” are efficiently-dispatched, musical night flights into dark serenities. But there’s little in the way of passion, more like solemnly clinical musicianship from the quartet who barely acknowledge each other’s presence onstage.

It’s a pleasant enough evening, efficiently dispatched by great players clearly attempting to straddle the worlds of jazz and electronica while retaining commercial appeal. But it’s that very efficiency and lack of risk involved which ultimately means I would have been as well staying at home and listening to them on record.