Banksy: The Room in The Elephant Review 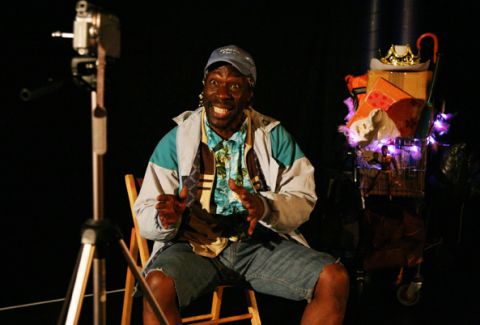 A sharp wee nugget set in the LA hills.

When graffiti artist Banksy was in Los Angeles for his Oscar-nominated film Exit Through the Gift Shop, he came across an old water tank and sprayed the words ‘THIS LOOKS A BIT LIKE AN ELEPHANT’. In no time, word got out that Banksy had left his mark and dealers moved in to buy the rights to remove what had become a work of art. Unknown to him, this big tubular tank had been home to a man called Tachowa Covington for seven years. A home that he had furnished and carpeted, that had a stove, a TV and even got calls from the US mailman. His home was now a coveted and valuable work of art so Tachowa was homeless again.

With an ironic crumply silver screen in the background and to the sound of the opening music of Cinematic Orchestra, Gary Beadle appears on stage as Tachowa Covington, pushing his whole life in a trolley bedecked with fairy lights. A positive and dignified dude dressed in Hawaii shirt and plastic bling, Beadle reels the audience in from the get go.

The self–referential, labyrinthine tale from Tom Wainwright is told in style and with the character brilliantly realised by Beadle whose LA accent has been confirmed as utterly authentic. The vibrant jive talk tips to a rap at times as the multi layered story of inequality and the prairie wide difference between Tachowa and his mega rich neighbours unfolds. A man with dreams and dignity is turned to despair for the sake of what American Indians called ‘trapping rivers’: taking what should belong to no one.

With music from Massive Attack, Portishead and Roni Size this taut, engaging, punch-in-the-gut theatre is a powerful comment on art and life. Vital watching!