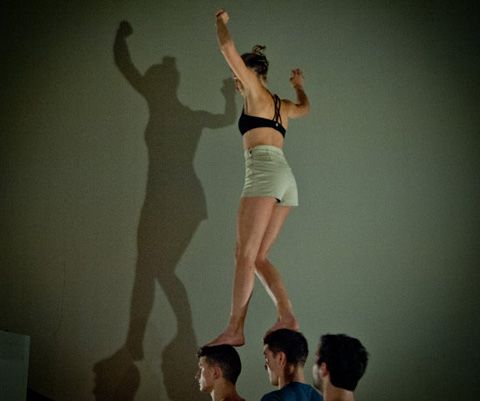 Entering through the audience, dressed for a sunny day in the park, the cast of A Simple Space began playing games. Skipping in unison, faster and faster until the ropes blurred and one by one they tripped up, the last one standing was the only one who didn’t have to take off an item of clothing. This game continued until the loser stripped completely, forfeited to skip naked, face to the wall.

Then there was a breath-holding contest (we should have practised with them) while one of their number tried to stand on his hands for the duration and more handstands to see who could hold up the longest while the audience threw plastic balls at them. In this vein the fun continued, with each game progressively more daring than the last.

The four male performers displayed awe-inspiring strength and skill but female performer Jascha Boyce was terrifyingly, brilliantly daring. Her feats of balance and obvious lack of vertigo demonstrated during the show was as nothing compared to the build up to the gasping finale, which is where the breath-holding experience would have been useful.

The space was simple and the audience was tightly packed in on three sides. In the jaw-dropping denouement there was much flinching as the front rows nearly became involved in the action. The silent screams of the crowd turned to thunderous applause as they nonchalantly bowed as if it were nothing and everyone rose to their feet. This is the first standing ovation I have witnessed at this year’s Fringe and no company worked harder for it or deserved it more.

It is no wonder that this unassuming Australian company have won many awards. Self-funded and doing it all themselves – even the live music provided throughout by their creative percussionist - Gravity and Other Myths rely on your support. Do yourself and them a favour: go see it and take all your family and friends.