A Matter of Life and Death Review 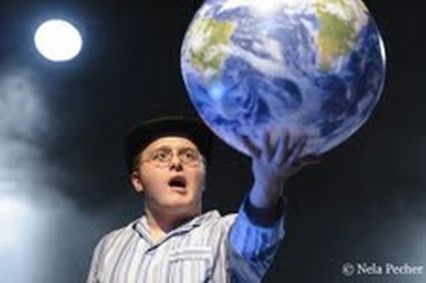 It seems a mad prospect to bring an adaptation of the classic Powell and Pressburger film to the stage. Surely it would bomb, crash and burn?

For those who don't know AMOLAD, as the film was known, it's a 1946 romantic fantasy shot in both monochrome and Technicolor using innovative techniques and huge sets. It also often appears in the top 20 of the best British films ever made; hence concerns for a transition to The Fringe.

It has been staged before however, notably by Kneehigh Theatre, and this production has sensibly followed some of their lead.

But back to the action which starts, as in the movie, with a panning tour of the universe - "big, isn't it?" - before focusing on Peter, the pilot of a doomed Lancaster bomber returning from a raid. He is bailing out, but there's a catch - he has no parachute. In a wild and desperate transmission he talks with June, a radio operator, mixing data, with the personal, poetry and philosophy, and in an unlikely five minutes falls passionately in love.

Due to an administrative error in tallying up the war dead he appears to survive and a Conductor is dispatched to bring him to the "other world". The mistake is not so easily rectified as Peter prepares to take his case to remain on earth to a celestial court, helped by June and her brain surgeon friend. Will love win out even over death?

The plot is almost Shakespearean in form (the film has an amateur production of A Mid-Summer Night's Dream within it) and this production plays on that, not only with a pyjama clad Puck, but in also bringing the Bard into the heart of the action. The other recognisably Puck-like character is of course Conductor 71, transformed from a French revolutionary fop into a Daliesque incompetent stage magician who has met an unlikely end involving milk. The contrasting characters are nicely played out against a (mainly) period soundtrack with a pure stiff-upper-lip romanticism evoking both classic movies and an idealised wartime Britain.

The story was very much of its time, being commissioned in a near propaganda attempt to ease British-American relations at the end of the war, and with passing time it has lost some of its meaning and immediacy. Perhaps for this reason June has changed from American to English. Less understandably she has also changed sex; being played here by a young man in a bit of Shakespearean gender-bending. There's nothing wrong with it but it doesn't add anything and changes the dynamic.

There are really only two ways in which to stage this - large or small - and the company have sensibly focused the action centre stage in a toy theatre that is part musical box and part travelling showman's booth. It forms set, scenery, props and everything in between as a framework for the large cast, which rivals the National Theatre's production in number.

There has been some inspired thinking and direction in putting this together. It does however slightly dodge the dreams versus reality issue and is less grounded in reality than Powell intended. To this extent the conclusion (which goes with the Kneehigh version, rather than the film) could be clearer and have more impact.

With a little bit more spectacle, as displayed in the opening sequence, a few more theatrical tricks, KCS Theatre could expect to find that wizardry.

Improbable though it is, it succeeds in carrying the audience along in a flight of romantic fancy.