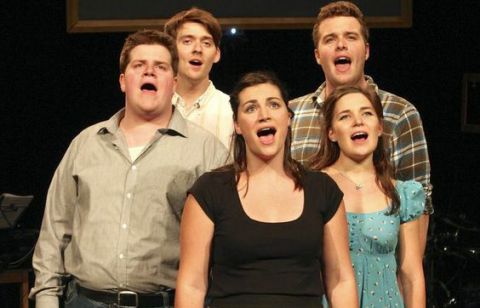 The concept of "35MM: A Musical Exhibition" is to build on the visual impact of works in a gallery by photographer Matthew Murphy through music.

The cast of three men and two women wander around the stage engaging with the paintings and each other with a song for every photograph.

One of the challenges of a multi-media production is getting the balance right. In this case the cast are in the foreground and paintings at the back, and perhaps the audience tends not to dwell much on the photographs.

There is no plot as such, a series of themes linking photograph to song that cover all aspects of the human condition.

What I really enjoyed was that there was a variety of styles of music and that they were very melodic.

One of the bugbears of some musicals is that you lose the story as the lyrics get obscured by the delivery, but here all five cast members had excellent diction which ensured that you engaged with each number.

I particularly liked the number about the father and the young child and it was hard to pick out one singer over the others but they worked well as individuals and as an ensemble.

Shows where the cast seem to be taking turns to sing can be tedious but the director seems to have this covered and the format works really well.

Ryan Scott Oliver’s music is a treat and may be harking back to old style musicals. I wouldn't be surprised if some of the numbers find their way into another project in the future.