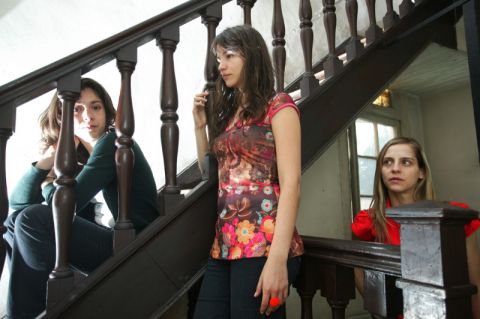 Villa Grimaldi is one of more than 1,200 detention and torture centres in Chile that were operating under the regime of President Pinochet. In 1989 the military razed it to the ground in an attempt to destroy any evidence of the atrocities that took place there. After a public campaign in 1994, it was transformed into a memorial park and ten years later was declared a National Historic Monument.

Villa is the first of two plays that constitute "Villa and Discurso," by Chilean playwright Guillermo Calderón. It is ostensibly a discussion sparked by Calderón’s emotional response to the incongruence of this place that housed such ugliness, now standing as a place of beauty, named the Villa Grimaldi Peace Park. There is, for example, the converted Rose Garden: a small and private place where once the military would rape women, sometimes with dogs.

It is astonishing then, that Calderón’s carefully crafted play is full of humour, somehow managing to convey the horror and its legacy with a tender humanity that is far more uplifting than it has any right to be.

Three young women sit around a table conducting a secret ballot that will decide just what sort of memorial should be made of Villa Grimaldi. There is Option A, to restore the house as it was, creating a "reality Disneyland," a kind of torture-chamber-theme-park. Option B is to turn the site into a museum, complete with Apple Macs and contemporary art.

As the women debate the issues, with continual shifting of positions, it is apparent that there is no definitively "right" answer. The endless permutations of the various arguments reveal that one person’s assertion of their rights violates the rights of those in opposition.

During their discussion, the three women, all called Alejandra, discover that they are each the progeny of a rape that occurred in the Villa. One by one, they each put on a white jacket and by the end of the play they have become President Michelle Bachelet, the first female President of Chile who, along with her mother, had been tortured at Villa Grimaldi.

In Discurso the three women, collectively as Bachelet, deliver a fictitious final address to the Chilean people. In this imagined speech, Bachelet defends the decisions she made while in office and speaks of her father – neither of which she ever did. Again, this is a vehicle for saying so much more than appears on the surface and again it is told with great humour.

Bachelet speaks of the "cheerful resentment" of the Left and acknowledges that "the Right have no culture." She asks why the USA are "all Bibles and sawn-off shotguns" before smiling, "only joking, we need them as our friends."

Explaining away some decisions she took on the grounds that, "we are socialists lumbered with capitalism," she recognises the economic legacy of Pinochet who "knew Margaret would take care of him, while he stopped Chile from becoming Cuba." Such remarks are deliberately biting.

There were statements made about Chile being "one people" – a reference to the problems of the Mapuche that have yet to be resolved, and so many other references that, I am certain, sailed completely over my head. It didn’t matter. Take from it what you will, what is in no doubt is the brilliance of the writing and the power of the performances.

I will still be processing what I’ve learnt from this for many years to come and could happily watch it on repeat, knowing that all it speaks of and alludes to can be neither unravelled nor reconciled.