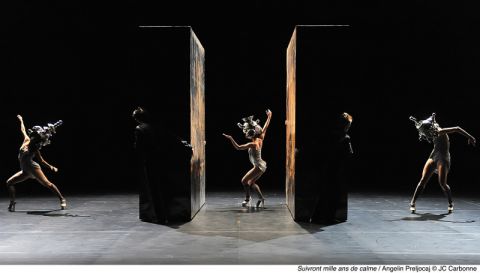 Physical dexterity is pushed to the extreme in an engrossing but often repetitive evening in this double bill choreographed by Angelin Preljocaj to the music of Karlheinz Stockhausen.

If fatigue was getting the better of any audience members gathered in The Playhouse last night amidst the hustle and bustle of Edinburgh’s vibrant August, the cacophony of Stockhausen’s Helikopter-Streichquartett of techno-organic turbulence couldn’t have failed to make them sit up and pay attention as the rattling sound of a mass expanse of machinery fills the auditorium and the curtain rises on a barren stage, lined with six dancers.

Dressed in vest tops and pants, the sextet limber up as the pulsing music begins, then they swirl in and out in different groupings and pairings in a visceral exploration of synergy between movements eliciting a raw, uninhibited physicality.

Staccato, hard and slicing constructions interweave geometric formations, matching the breathing of the Helicopter engines, rotator blades and the rise and fall of the Ardetti Quartet’s tremolos amidst the simplicity of Patrick Riou’s light patterns.

Abstract rigours of arms at 45 degree angles and head tilts were prominent, being returned to, or repeated by soloists or pairs of dancers throughout, amidst circular rotations and long leg extensions which added to the mechanical choreography, with dancers often pushing each other’s parts into motion.

This juxtaposed the fluidity of when they came together in a tangle of intertwining bodies as they pulsed and flexed against each other, with each lift or soar seamlessly tuning into the next gesticulation of movement.

The broad second positions kept the action grounded with bursts of flight harmonised through the charging, pounding music in an attack, but after about 15 minutes the excitement of the patterns and positions became pedestrian until a deafening silence for a touching finish of an isolated component slowly powering down.

Counter-balancing the force of Helikopter is the delicate prettiness of Eldorado (Sonntags Abschied) where a fantastic beginning slowly ebbs into monotony amidst a synthesised, cascading soundtrack. Twelve dancers form a semi-circle in front of panels, clothed in tight fitting transparent dress that surrounds them in an enchanting chain of lights. They respond to Stockhausen’s trickily hypnotic score as though trapped within the soundscape, not moving out of choice but by compulsion.

Preljocaj’s skill at moulding his dancers to express emotions that perfectly harmonise with the music is to be admired, however the overarching approach of reacting to discordant music soon wore thin, with the ethereal and instinctual combinations although impressive, once again became overly repetitive for the 40 minute run.

Helikopter / Eldorado (Sonntags Abschied) ran for one evening at The Playhouse, Edinburgh