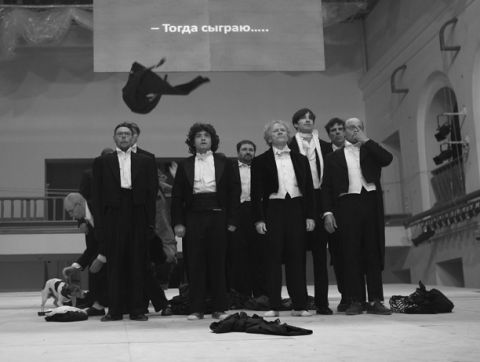 The audience may have been slightly unsure what to expect from Russian director, Dmitry Krymov’s  Laboratory “Designer”  version of Shakespeare’s romantic comedy. But we were in for a big surprise.

Comedy? This is a masterclass in farce, mime, clowning and sheer theatricality which made us laugh and weep at the intimate simplicity of storytelling across the barrier of language and culture.

The stage is virtually empty, showing the open wings and brick walls, with a huge chandelier sitting lopsided on the floor. Suddenly, amongst shrieks and shouts, a team of men begin to rush down the right hand aisle of the Stalls carrying a large tree trunk complete with branches and leaves. Balanced on top is a Jack Russell Terrier as tree and dog are lifted on to the stage.

Then a fountain, spilling water everywhere, is carried precariously through the Stalls: those sitting on the aisle may receive a surprise soaking, (the lady in front put up her umbrella). By now the audience is in fits of laughter at the antics of this army of clumsy Laurel and Hardy-style workmen.

These men are the Rude Mechanicals representing Shakespeare’s motley crew of “Hard-handed men of Athens” - carpenter, weaver, bellows-maker, joiner, tinker and tailor.  On this empty stage  they will attempt to perform the tragic love story of Pyramus and Thisbe. An elegant crowd of guests in evening dress now take their seats on a platform and in the Boxes, but warned that the theatre is not ready and the play unrehearsed.

While the actors discuss "the thematic and linguistic complexity" of the drama, (English translation of text/ dialogue on surtitle screens), the guests look impatient and a young man’s mobile phone rings to the others’ annoyance.  “I am not in Moscow, I am in Edinburgh!”  he replies to the caller.

And slowly the cast emerges with props and costumes, Venya the dog does handstand tricks to keep us all amused, as the giant, ungainly figure of Pyramus crafted out of moulded plastic, tape and metal, towers over his puppeteers.

His love for Thisbe is expressed through softly sung Lieder, as she appears from the shadows, her face like a china doll, the picture of sweet innocence. With great dexterity of grasping fingers,  she is given flowers and fruit as he slowly seduces her.

As well as paring down the Dream to the comic Interlude (performed at the Duke’s wedding), the company has returned to the nature of Elizabethan theatre for inspiration, the empty space of a stage, and amateurs playing comic parts.  The cast is a mix of real stagehands, actors, circus acrobats, a dog trainer and his dog, joined by opera singers and ballet dancers to create this imaginative burlesque show of music and magic.

Just as Hippolyta in the original play remarks “This is the silliest stuff that ever I heard”, members of the stage audience comment loudly on the modern avant garde style.

At times silly and overly sentimental, with clowning and bawdy jokes, this is theatre just as Shakespeare intended.  Just like Titania and Bottom, we are caught in a spell of illusion as the pure romance of the Romeo and Juliet story is dramatised with inventive, artistic vision.