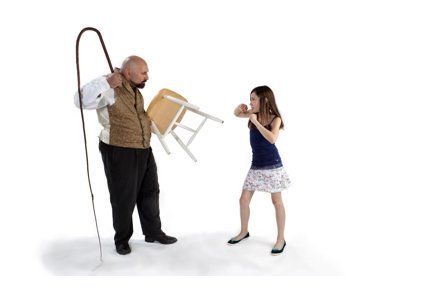 Rumour has it that big, bad American magician Paul Nathan lost a bet, the forfeit was to do a show for children – and the I Hate Children Children’s Show was born. Whether or not he regrets being so successful at getting children to love him is difficult to tell, but the fact that he does is indisputable.

While the audience shuffled into their seats, another big American guy, John Anaya, was loudly and furiously laying down some rock ‘n’ roll on his electric guitar, and you knew, without being told, that you were in for some in-your-face fun.

Paul Nathan was outside, just as loudly herding everyone in. He then started the show by letting us know that this is a show where the children are the stars (kind of said through gritted teeth) and that photos of everyone participating would be taken and uploaded to their website (parents objecting were advised to speak to him privately after the show).

What followed was pure entertainment from start to finish. The magic tricks themselves were as good as any you’ll see anywhere, but the real joy of this performance came from the combination of Nathan’s dry, acerbic wit, together with Anaya’s continuous musical commentary that also helped to maintain the pace and ensured there was never a lull, dull or quiet moment.

Every child in the audience was given an opportunity to join in, with most trying – and failing - to have a second turn. Mums and dads gleefully pushed forward reluctant children, seeming to relish the idea of throwing them to the lions (I suppose parents have to have their fun too!). There was ‘pyrogami’ (paper folding plus fire), group singing, balloon animals, mind reading and a whole lot of laughs.

The final trick was to fill an empty bowl with candy that each child could help themselves to on the way out - and for a guy who bases his whole act on hating children, this was a nice touch. One gets the impression that the success he has found with a young audience may have mellowed him slightly – but don’t bet on it!