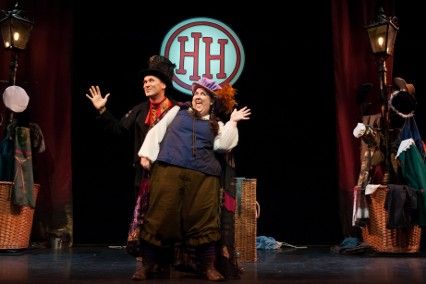 Horrible Histories has been phenomenally successful, with an award-winning BBC TV show, over 60 books that have sold more than 25 million copies and, since 2010, a hit stage show.

Terry Deary, one of the three authors of the books, has been very vocal about what he sees as the failings of the education system, dismissing schools as ‘a Victorian idea to get people off the street’. Deary’s aim was to make history entertaining and informing, providing grisly facts and ghastly details that reveal the bonkers nature of all peoples from the Aztecs and Ancient Egyptians, right through to Britain in the 20th Century.

Anyone wondering what was so barmy about Britain was in no doubt by the end of this performance, which was a roaring great romping mix of frightful facts and frolicking fun. With a large basket of props and costumes, Neal Foster and Alison Fitzjohn whizzed us through some of the more gruesome and gory bits of British history, hamming it up all the way

With a nod towards the location, there was some focus on Scotland and Edinburgh in particular. We learnt that the Romans had made it as far as the Grampians where they slaughtered the Caledonians, before introducing us to the delights of putrefied fish and roast dormouse. There was Wallace making a belt for his sword from the skin of Commander Cressingham and Jessie King, the last woman to be hanged in Edinburgh, murdering babies in the Stockbridge area.

It was a relief to find out that the notorious Scottish body-snatchers, Burke and Hare, were not actually Scots but a couple of Irish blokes who happened to be living in Edinburgh. However, it turns out that General Haig, responsible for more than 400,000 deaths at the Battle of The Somme, was born in Edinburgh – oh well, you win some, you lose some!

A number of the historic periods were introduced using the format of a variety of popular TV shows, from The Apprentice to Masterchef – great fun for the adults, although I doubt whether all the kids get to stay up late enough to recognise such references.

The show ended as it had begun, with a discussion of why Britain is so barmy. With a rollicking rendition of ‘Barmy Britain Bends the Rules’, bankers, burgers, NHS Direct (where doctors don’t need to see patients) and online dating, were all cited as evidence that Britain in the 21st Century is as reassuringly barmy as it ever was.

Fun and games aside, there is no doubt that Horrible Histories works as a vehicle to engage children with the facts of the past. There was much discussion in our house, as a result of the Burke and Hare routine for instance, of the Anatomy Act and the lessons that are learnt from past mistakes.

Entertaining and informative it was, in the end gleefully wiping the smug smile off the shiny face of the new millennium: we were left in no doubt that we are currently in the process of making our own horrible histories for future generations to look back on with cringing disbelief.