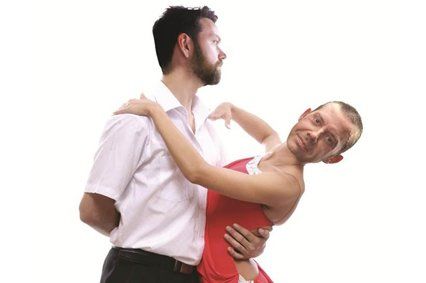 Some of the best art is scarcely noted. That’s almost certainly true of book jacket design, the thing that draws us to pick up and peruse the volumes on face display at Waterston’s and elsewhere. We’re intrigued, invited on journeys of which we have no inkling of their end, yet somehow the image on the cover, more perhaps than the title or author’s name, persuades us to pick it up and walk toward the tills with our wallets and purses open.

It’s a neat trick if you can do it well, and Jon Gray and Jamie Keenan have the skill in spades. No surprise then, that Peppers Theatre at the Edinburgh International Book Festival was crowded, even if a substantial sprinkling looked as if they might be art college students.

Graphic design is a term that can cover a multitude of sins (and not infrequently does), but book jacket design places particular demands on those who produce them.

What is produced now, by practitioners like Gray and Keenan owes much to one publisher and one designer, namely Penguin paperbacks and their principal designer, Germano Facetti. Using both classic paintings and bold designs to sell their paperbacks, Penguin revolutionised the way the public viewed and bought books.

In the contemporary world, Gray and Keenan have taken Facetti’s legacy and returned to the simple presentation of the author’s name and title, but presented in creative and imaginative ways.

Gray and Keenan also took an imaginative turn in presenting their material, demonstrating by way of a multitude of power-point slides their various ways of presenting the same information in various intriguing and stylish ways. Space and perhaps the tolerance levels of readers precludes detailing them all here, but according to Gray and Keenan there are essentially twenty different approaches, all of them involving a respect for the content which sought to complement it and, so far as possible, suggest its nature.

Both designers included rejected material in the presentation, sometimes explaining the reasons, sometimes shrugging off the rejection with perplexity. Their engaging, if necessarily breakneck delivery caused this reviewer to ponder another career for them in alternative comedy, and as time finally ran out for a remarkable double act one was left anxious for more of their informed and informing presentational skills.