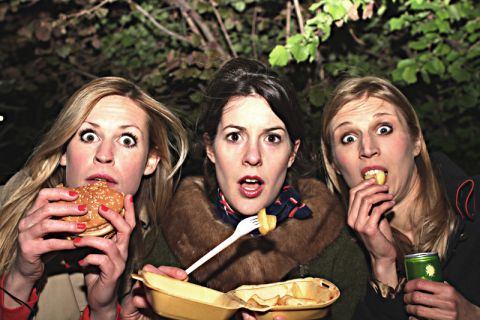 The first thing that hits you about the all female comedy trio, The Boom Jennies is the sheer energy on display when they hit the stage. From the first minute they are jumping around with the exuberance of a 5 year old on a sugar high. Their sketches are similarly energetic, full of cheeky silliness and a nicely surreal twist, frequently presenting familiar situations with a playful twist.

If I were to describe this show in a word it would be "fun". The three performers have oodles of natural talent and really make the stage their own with a level of assuredness more experienced performers would be jealous of. Their niftily paced sketches present us with a series of sometimes neurotic, sometimes outright deluded characters, some brilliant comic dances and some really quite clever running gags, like a psychotic french penpal and a series of jokes involving food in increasingly bizarre ways.

These three performers have a great instinct for funny situations and their characters are both well-performed and well written.

All this combined with a bouncy soundtrack make for a brilliantly funny sketch show, remeniscent of '90s comedy such as Big Train and Smack the Pony, with friendliness, energy and a genuine sense of fun to boot!

You will certainly get your money's worth by seeing The Boom Jennies, and I look forward to seeing what they'll come up with in the future.