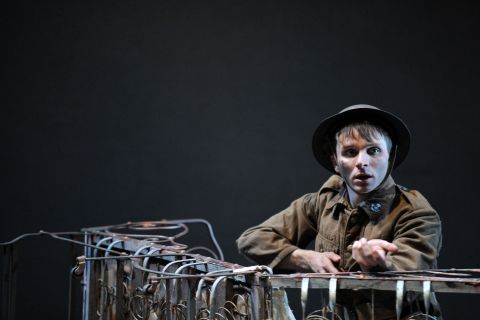 Private Peaceful was written as a book for older children in 2003 by Michael Morpurgo while he was children’s laureate and has since received numerous awards. It has been adapted as a play, a concert, for radio readings, and there is talk of a film. These are impressive credentials, so it is with some sadness that I have to say I was not bowled over by this one man production.

Private Peaceful tells the story of Private Tommo Peaceful, a young recruit who lied about is age to serve along side his brother, Charlie, in the First World War and who now faces the firing squad for being more loyal to his brother than the Crown. We spend his last hours with him as he relives his short life, going over happy memories while the terrible countdown goes on.

The set was empty except for an iron cot, too short for his growing lads’ legs, where young Tommo lies sleeping with his kit nearby.  Unaccompanied WW1 songs that pull no punches are playing in the background before the play begins.

There is only the actor and a few sound effects and Leon Williams becomes what is essentially just a big, innocent boy.  He runs around the stage like the eager youth he was playing and does all the other parts from his Scottish teacher, the old crone willing the young lads to sign up (I doubt if an old wife in 1914 would use the term ‘chicken’), the company sergeant and the local Colonel doing all the various accents pretty well. There seemed too much space around what should maybe have been a more intimate environment.

However, it is a book adaption and that’s what it felt like - a book being read, in spite of all the running around.   It is clearly a fine story and an important social history lesson for a young audience but it lacked the element of adult theatre needed to give it an edge. It spoke of gas attacks and shooting and some of the horrors of the trenches and cruelty of the Cos, but with unrelenting rosiness and no sense of the sheer shit-scaredeness of it all. There were echoes of Two Little Boys as he couldn’t leave his brother dying and so commits the mutiny that leads to his fate.

The venue, that feels like half of a circus tent, was noisy from the buzz outside and what seemed like a constant trickle of late-comers did not help.  I found myself looking at my watch as much as Private Peaceful did. There was a standing ovation from the mainly family audience at which this show was pitched.