Aria in an Italian Garden Review 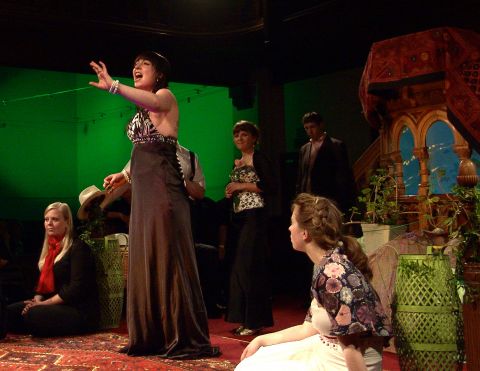 We are in Italy with an opera company rehearsing inside a villa; singers wander outside with unpredictable consequences. The evening is divided into two acts, each with three scenes.  In each scene are sung excerpts from well known and well chosen operas and musicals. This gave the opportunity for solo parts, small groups and the entire chorus of the twenty six performers.

This is the first Fringe performance from a newly fledged opera company, Aria Alba - Opera for All, which started life in December 2010 as the brainchild of the night’s conductor, Nell Drew. She is an opera singer living in Edinburgh who gives voice coaching and so well able to attract a balanced group of enthusiasts for their new venture.

They did well. It was clear that some of the singers were experienced, others learning the ropes, but overall the music and the theatre was a treat. It would hard not to mention the twelve year old Marcus Swietlicki with his solo from Mozart’s Figaro and later Any Dream Will Do from Lloyd-Webber’s Joseph.

Two small points. The photographic backdrop on screens started with lovely pictures of flowers, gardens and the fountain sculpture which proved a great scene setter. Just a pity the screen shots tailed away to boredom. And it was a little hard sitting at the back to hear the essential asides, about rehearsals I think, at the start of each new scene.

Onwards and upwards for an exciting future.