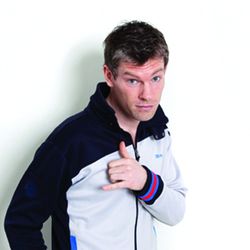 This New York newcomer's show Misspelled is a definite single-topic solo show. His comedy revolves around his dyslexia and how it influenced his 1970s Queens upbringing. His affable performance, helped out by a projector and a computer-created voice delivers fairly consistant yet gentle laughs. Bishop has educated himself very well about the details of his dyslexia and his ultimate message about the condition is extremely positive, however his jokes never really make it to the level of the truly hilarious.

His observational imagery is good throughout as he proceeds to describe with admirable honesty the difficulties he faced in his upbringing as his dyslexia remained undiagnosed. His calm and measured delivery make a fairly tough deal in life seem less harsh, as he clearly uses it to derive humour rather than bitterness.

Dealing with subjects such as self-confidence, phonological slips and the myths surrounding dyslexia, his show is a fascinating insight into the world of the dyslexic mind. He provides examples of his own problems with writing, with an endearing self-deprecation, and he exposes the myths surrounding dyslexia with good humour. When he is in full campaigning mode, his jokes work best.

However, not all the jokes work as well as Bishop would like and though he is a very likable performer, the pace of the show is a little sluggish, there is very little in the show that is unlikeable, but you leave the Gilded Balloon feeling that Bishop's routine was building up to a fiery climax which never comes.

The very admirable aims of the show, to promote awareness about dyslexia, hit home well, and the audience finds itself better educated than when they went in, but as a comedy show "Misspelled" is a bit of a disappointment. It's not awful or unenjoyable by a long stretch, but the laughs it does deliver won't set the heather alight either.

If you are interested in learning more about Dyslexia in a funny and easygoing way, by all means go and see Aiden Bishop's show, you will certainly get something out of it. However if you want a top-notch comedy show, you might be a little disappointed at the pace and energy of this performance.