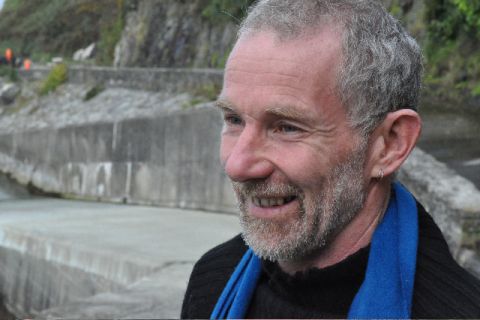 On the evening of Sunday 14th August, the small Peppers Theatre stage was packed with poets – not the usual one or two writers and a presenter; here were five international poets from Belfast, Malta, Majorca, Cyprus and the Isle of Lewis. Introducing the event was Robyn Marsack, director of the Scottish Poetry Library.

In co-operation with the SPL,  Literature Across Frontiers (LAF) arranged a writers’ workshop recently at Crear, Tarbert, Argyll, bringing together these poets from islands around Europe. This was apparently an inspiring and educational collaboration, learning about language with the aim to translate selected poems - say, from English into Turkish. The workshop and subsequent poetry readings in Crear were part of the "Year of Scottish Islands Culture" series of events.

"Crear, space to create, is an inspirational working space with accommodation on the west coast of Scotland, connecting individuals and organisations across the arts worldwide through innovative residencies."

The poets in turn read their own poem followed by the translation by another poet into their language;  for instance Northern Irish writer, Miriam Gamble’s witty and romantic “Semi-colon”, was translated into Catalan by Maria Rosa Llabres Ripoli.

An atmospheric narrative about the wild rugged Icelandic landscape, “Ridge above Lake Myvatn” was first read in English by Ian Stephen (with lively Hebridean storytelling skill) and then repeated in the translated version in Maltese by Adrian Grima.

Reading poetry requires fine expression over every syllable, each word and stanza, with flowing pace and rhythm.  Adrian, Miriam and Ian have a rich quality of voice and performed their work with style , while one or two of the writers seemed uncomfortable with public speaking, reciting with a monotonous tone.

As highlighted in the EIBF brochure, the focus of the event was writing about island life and the sea from the Hebrides to the Mediterranean - “ sunshine and storm, wanderings and landings”.  But there were few poems describing travel or a sense of place, with subjects ranging from love, relationships, folk tales and childhood to a saga about a camping trip.

While this eclectic anthology of poetry in a colourful array of accent and language was often evocative, 57 minutes was too long for a series of readings. There was time for just one question from the audience -  “But can you describe how you were able to translate the poetry?” asked a man in the front row.

More time could have been given to a literary discussion and explanation about their writing, the translation process, and the poets' own experience of their "Small Island " lives and culture.

Don’t forget
to send me a wave or two
from the other side.

Just dip
the pulse
in your long fingers
to the churn
of Manhattan.

It won’t be instant
but of course I’ll sense it
arriving in
at our own west side.

(Ian Stephen, from the Isle of Lewis).