The Man Who Fed Butterflies Review 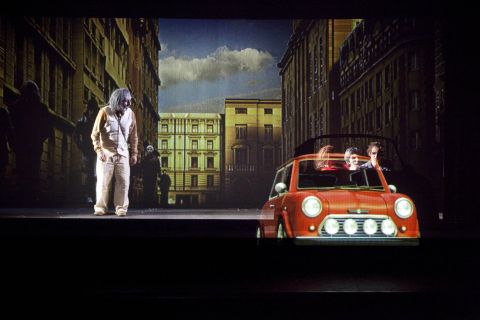 This is the second play in a trilogy being produced by Teatro Cinema, the new experimental theatre company from Chile, which is also presenting the brilliant film noir Sin Sangre at the Edinburgh International Festival.

The Man Who Fed Butterflies is an original multi-media drama using digital images, special film effects and 3D animation created over two years by a team of fifty people.

As seen in Sin Sangre, the combination of high tech cinematography on screen with live acting on stage is an ingenious theatrical experience. Just like watching a 3D animated movie, the audience is much more involved and feels part of the action.

The plot is quite complex inspired by the Butterfly Effect, the metaphor for the concept of Chaos theory, such that small actions may produce large variations in the long term: the beat of a butterfly wing could cause a tidal wave. In popular culture it also refers to time travel and `what if` (“Sliding Doors”), scenarios where if one storyline diverges at a significant moment, it results in different outcomes.

In this play, various stories are linked around the character of a musician, Filippo, who has collapsed after a heart attack and believes he is approaching death. He feels compelled to re-enact an ancient rite, feeding nectar to butterflies before their seasonal journey of migration. Two linked narratives involve a film maker directing an historical movie about a Black Knight, and a mother visiting a hospital where her daughter is in a coma after an accident. Underlying themes revolve around notions of coincidence and fate.

An ensemble of five actors play the various characters, Filippo, the Black Knight, the film maker and others, who are also depicted on film, performing within this animated environment, touching butterflies, looking out of a window in a Castle tower, walking down a hospital corridor. The computerised imagery of the Black Knight scenes is reminiscent of “Shrek” with similar fairytale charm and humour.

On leaving the King's Theatre, an overheard comment, “It was rather long, I think,” to which her friend replied, “One and a half hours too long!”   I would say half an hour too long.  If edited to about 75 minutes this would be a poetic, philosophical fantasy about life’s journey through animation and drama.